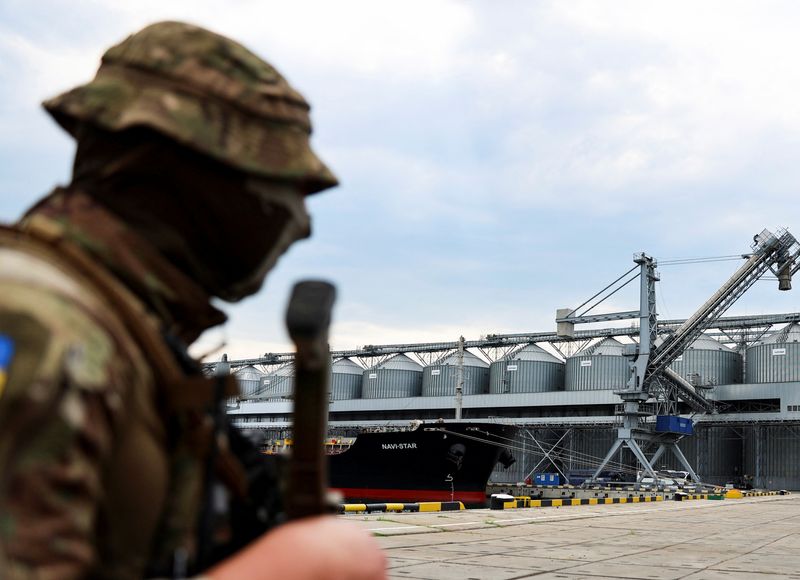 © Reuters. A Ukrainian serviceman stands in front of silos of grain from Odesa Black Sea port, before the shipment of grain as the government of Ukraine awaits signal from UN and Turkey to start grain shipments, amid Russia’s invasion of Ukraine, in Odesa, Ukraine J

ODESA, Ukraine (Reuters) – Ukraine’s president visited a Black Sea port on Friday to show his country is ready to start exporting grain under a U.N.-brokered deal aimed at easing global food shortages, and said Kyiv was awaiting the signal for the first shipment.

On a rare trip out of Kyiv since Russia’s Feb. 24 invasion, President Volodymyr Zelenskiy denounced a Russian Black Sea blockade that has prevented Ukraine from exporting grain, contributing to a sharp rise in global grain prices.

“We are ready to export Ukrainian grain. We are waiting for signals from our partners about the start of transportation,” Zelenskiy said on the Telegram messaging app after visiting the port of Chornomorsk near the southern city of Odesa.

He said he thought exports could resume “today or tomorrow”.

“It is important for us to remain a guarantor of global food security. While someone blocking the Black Sea takes the lives of other states, we allow them to survive,” he said in comments posted alongside photographs of him wearing a khaki T-shirt and meeting officials in front of a docked ship, the Polarnet.

Russia and Ukraine are major global wheat suppliers, and the U.N.-brokered agreement they signed in Istanbul last week is intended both to ease the food crisis and reduce global grains prices that have risen since the Russian invasion.

The agreement aims to allow safe passage for grain shipments in and out of Chornomorsk, Odesa and the port of Pivdennyi. Moscow blames Ukraine for stalling shipments by mining the port waters.

Presidential officials said there were 17 ships docked in Ukraine’s Black Sea ports with almost 600,000 tonnes of cargo. Of them, 16 vessels held Ukrainian grain with a total tonnage of about 580,000 tonnes, he said.

Ukrainian Infrastructure Minister Oleksandr Kubrakov told reporters in Odesa that 17 vessels trapped by the Russian blockade were already loaded with grain, and another was now being loaded.

Kubrakov said Chornomorsk and Odesa were ready to start shipping grain and that he hoped Pivdennyi would be ready by the end of the week.

“We hope that today we will receive confirmation from the U.N. regarding the proposed corridor in which the ships will sail through the Black Sea towards the Bosphorus, and after this we (will be) ready to begin. I hope that the first ships will leave our ports before the end of this week,” he said.

Kubrakov did not say what volumes of grain would be shipped and gave no further details of the planned cargoes.

“This initiative, if it works as we hope and expect it will — and if our Turkish and U.N. partners can ensure its execution — we are convinced that world (grain) prices will drop,” he said.

Ahmet Yucel Alibeyler, captain of the Polarnet, said the loading of 12,000 tonnes of bulk grain had started and the plan was to finish loading by noon on Sunday.

“After that, we will start our passage through the identified grain corridor towards Turkey, along with the other ships, as the convoy leading vessel,” he said.