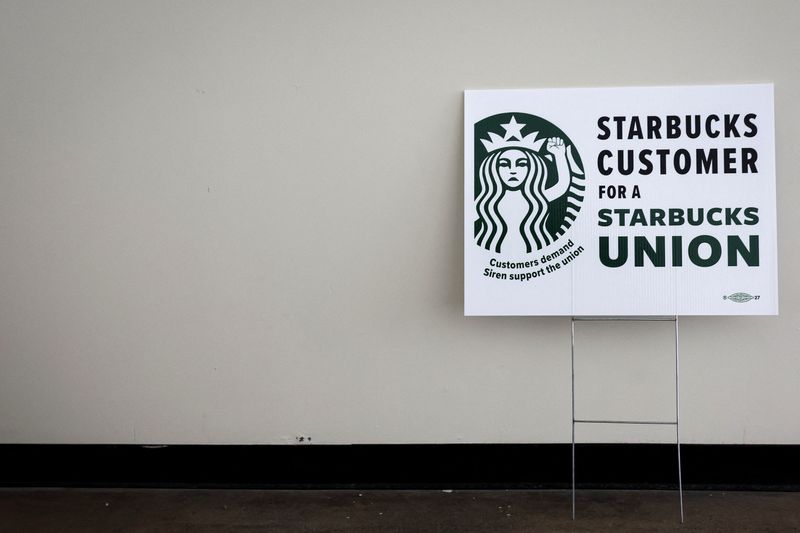 © Reuters. A sign showing support for a Starbucks Union is seen at the Workers United, an affiliate of the Service Employees International Union, offices in Buffalo, New York, U.S., February 23, 2022. REUTERS/Brendan McDermid

By Hilary Russ and Danielle Kaye

NEW YORK (Reuters) -Workers at a Starbucks Corp (NASDAQ:) cafe in Mesa, Arizona, on Friday won their bid to join a labor union, marking the first company-owned U.S. location outside of New York state to do so.

Employees voted 25-to-3 to join Workers United, an affiliate of the Service Employees International Union, according to a livestreamed ballot count conducted by the National Labor Relations Board.

Only three out of the company’s roughly 9,000 U.S. locations have voted to join the union so far, but a stream of other stores are waiting in line behind them to hold union elections.

In the last six months, employees at more than 100 stores in at least 26 states have petitioned the NLRB to hold union elections in their locations – including the company’s flagship Reserve Roastery stores in New York and Seattle, Starbucks’ hometown.

The union is also winning legal arguments. Friday’s ballot count had been rescheduled after Starbucks challenged election procedures but lost.

“As we have said throughout, we will respect the process and will bargain in good faith guided by our principles,” Starbucks said in a statement about Friday’s results. “We hope that the union does the same.”

Two stores in Buffalo, New York, joined the union and have begun negotiating contracts. Workers at a third location in the city voted down the union, and three other stores there had ballots impounded on Wednesday pending resolution of Starbucks’ appeal.

The battle between Starbucks and Workers United is getting frothier. At some point, the union’s effort to move store by store will “have to congeal into a more coordinated strategy, or risk losing relevance,” Jefferies Equity Research analysts wrote, citing an interview with former SEIU President Andy Stern.

First contracts can set precedent, so they are “onerous and time-consuming” to bargain, the note said of the pressure on Buffalo stores to reach a deal.

The union drive does not appear to pose major financial risk to the coffee chain in terms of big wage or benefit increases, the note added.

But the landslide Workers United victory in Mesa might propel the Starbucks campaign and a broader organizing wave across the low-wage service sector, said John Logan, a labor professor at San Francisco State University.

“The amount of support that we received from Buffalo is absolutely amazing,” said Mesa employee Michelle Hejduk at a press conference after the vote, referring to the collaboration among pro-union Starbucks workers nationwide.

Altcoin Roundup: 3 portfolio trackers NFT and DeFi investors can use to stay organized