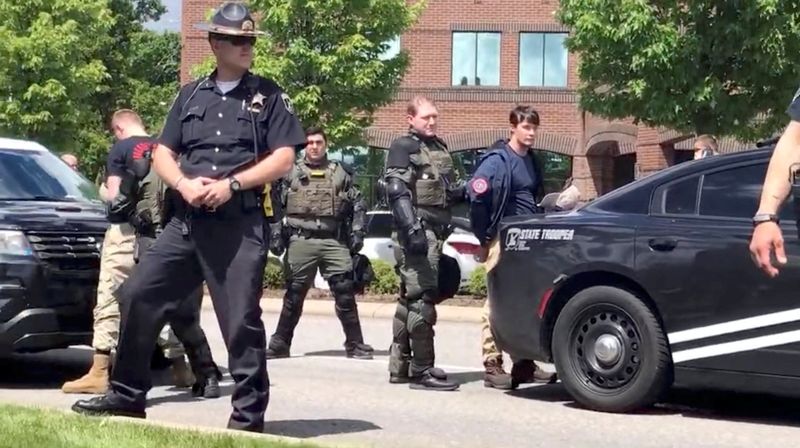 © Reuters. FILE PHOTO: Police officers guard a group of men, who police say are among 31 arrested for conspiracy to riot and are affiliated with the group Patriot Front, after they were found in the rear of a U Haul van in the vicinity of a Pride event in Coeur d’Al

(Reuters) -Thirty-one members of white nationalist group Patriot Front, arrested in Idaho over the weekend on suspicion of plotting to violently disrupt an LGBTQ pride event, were released from jail on bond and will make their initial court appearances in the coming weeks, a court official said on Monday.

The men, arrested on Saturday after the U-Haul rental truck they were riding in was pulled over, face misdemeanor charges of conspiracy to riot, according to Coeur d’Alene, Idaho, Police Chief Lee White.

A local resident called authorities after spotting the group of men, all dressed alike with white gaiter-style masks and carrying shields, loading themselves into the truck “like a little army,” White said.

Police stopped the truck about 10 minutes after the call, a short distance from the “Pride in the Park” event, he said.

Karlene Behringer, the trial court administrator in Kootenai County, confirmed that the men bonded out of jail and will appear in court at a later date.

During a news conference on Monday, White said authorities had no prior knowledge of the group’s plans in Coeur d’Alene, an Idaho Panhandle city about 380 miles (612 km) north of the capital, Boise.

“One lesson we have for our community … is one concerned citizen can prevent something horrible from happening,” White said.

Video taken at the scene of the arrest and posted online showed a group of men in police custody, kneeling next to the truck with their hands bound, wearing similar khaki pants, blue shirts, white masks and baseball caps.

Police officers seized from the truck at least one smoke grenade, a collection of shields and shin guards and documents that included an “operations plan,” White said over the weekend, adding these items made their intentions clear.

“That level of preparation was not something you see everyday,” he said. “It was clear to us immediately that this was a riotous group.”

The men had come from at least 11 states across the country, White said, including Texas, Colorado and Virginia.

Since the arrest, White said, he and others in his department have received death threats. He gave no details.

The Patriot Front formed in the aftermath of the 2017 white nationalist “Unite the Right” rally in Charlottesville, Virginia, when it broke off from another extremist group, Vanguard America, according to the Southern Poverty Law Center, which tracks hate groups.

Saturday’s pride event, described by organizers as the largest ever in North Idaho, drew a crowd of several hundred people for festivities that included a talent show and drag queen dance hour, local media reported.

“We are in the same city that we were last week,” Coeur d’Alene Mayor Jim Hammond said on Monday. “We are a city that respects everyone, that welcomes everyone.”

KREM-TV in Spokane reported several smaller groups turned out to protest the gathering, with dozens of individuals seen carrying guns on the fringe of the park in what organizers said was an attempt to intimidate those attending the LGBTQ event.