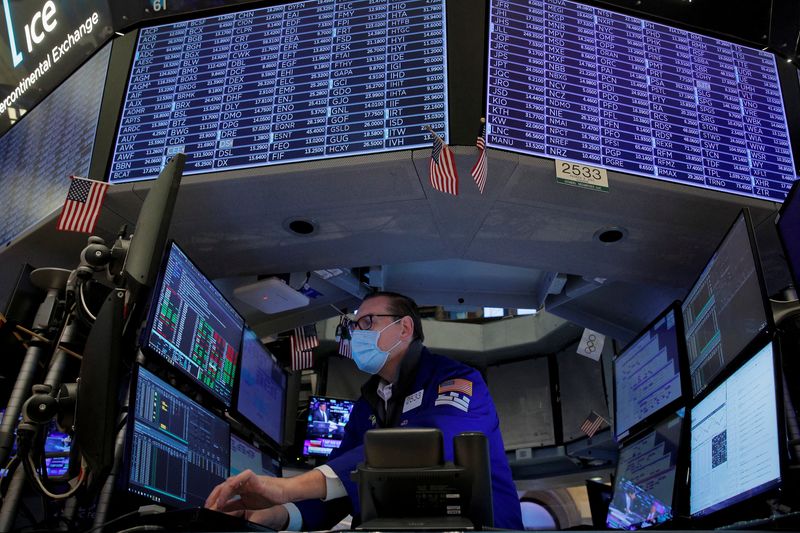 (Reuters) -Stellar outlook from Microsoft put U.S. stock indexes on course for a stronger open on Wednesday after two sessions of turbulent trading and ahead of the outcome of a Federal Reserve policy meeting.

Microsoft Corp (NASDAQ:) gained 5.3% before the bell after estimating current-quarter revenue broadly ahead of market estimates, driven in part by its cloud business. Chipmaker Texas Instruments (NASDAQ:) Inc rose 4.6% as it also gave a strong outlook.

The rate-sensitive tech and growth stocks have recently been roiled by fears of aggressive Fed action to combat inflation. Rising geopolitical tensions around Russia and Ukraine have also weighed on the market, with the flirting with a correction twice this week.

The Fed policy decision is due at 2 p.m. ET (1900 GMT), with the U.S. central bank expected to signal the start of an interest rate hike cycle beginning March.

The announcement will be followed by Fed chairman Jerome Powell’s news conference, which will be parsed for clues on the magnitude and pace of hikes for the year and strategy for shrinking the central bank’s roughly $9 trillion balance sheet.

Fed funds futures traders are pricing in a 25 basis point hike in March, in addition to three more rate increases by the end of the year.

“If between the notes and Chairman Powell’s press conference today, we get some clarity around that path of interest rate hikes that could certainly settle down the market and decrease the volatility we’re seeing,” said Mike Skillman, chief executive officer at Faith Investor Services in Dallas.

“When rates rise valuation becomes more important so earnings become more important to save the day. From a market perspective, earnings going forward are going to be better.”

The fourth-quarter reporting season is in full stride. As of Tuesday, analysts expected S&P 500 earnings to grow 24.1% year-over-year, according to Refinitiv.

Tesla (NASDAQ:) Inc added 4.2% ahead of its quarterly results after market close, while AT&T Inc (NYSE:) rose 2.2% after it beat market estimates for quarterly revenue on strong wireless and streaming demand.

Barbie maker Mattel (NASDAQ:) jumped 7.6% on winning back rights to make toys based on Disney Princesses from Hasbro Inc (NASDAQ:).

Johnson vows he will not quit as he awaits Gray report

Boeing sinks to loss on $4.5 billion charges related to 787 delays