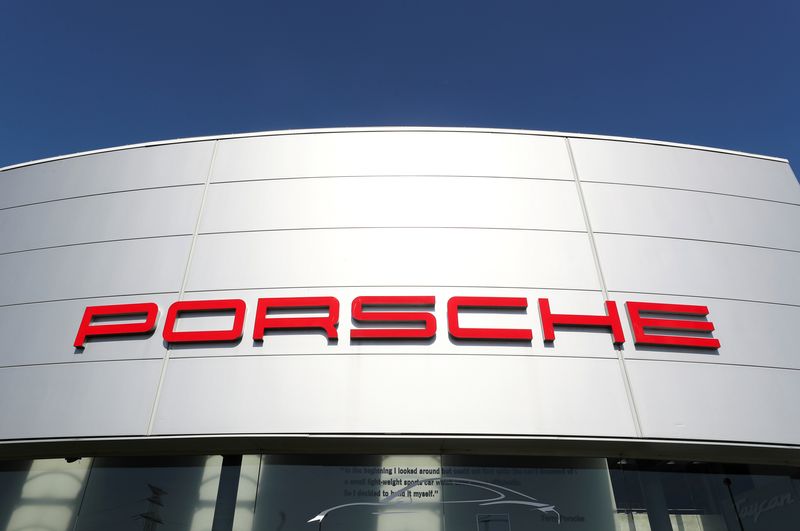 © Reuters. FILE PHOTO: A logo of Porsche is seen outside a Porsche car dealer, amid the coronavirus disease (COVID-19) outbreak in Brussels, Belgium May 28, 2020. REUTERS/Yves Herman

FRANKFURT (Reuters) -Volkswagen and its top shareholder Porsche SE on Thursday fleshed out details of a possible listing of luxury carmaker Porsche, edging closer to what could become one of the world’s largest stock market debuts.

In case of an initial public offering, the share capital of Porsche AG would be equally split into preferred and ordinary shares and up to a quarter of the preferred stock would be placed on the market, Volkswagen (DE:) said, confirming an earlier Reuters story.

This implies a potential placement and free float of up to 12.5% of Porsche AG’s total share capital, or more than 10 billion euros ($11.2 billion) when using a valuation of around 90 billion.

Ordinary shares, which would solely be owned by Volkswagen and Porsche SE under the plans, would not be publicly listed, a spokesperson said.

“The automotive industry is changing fundamentally. Volkswagen is determined to play a leading role in a world of zero-emission and autonomous mobility,” Volkswagen Chief Executive Herbert Diess said.

“An IPO of Porsche AG would give us additional flexibility to further accelerate the transformation. Porsche AG would gain more entrepreneurial freedom and at the same time continue to benefit from group synergies.”

According to the framework agreement, Porsche SE, which owns a 31.4% equity stake in Volkswagen and 53.3% of the voting rights, would buy 25% plus one share of Porsche AG’s ordinary shares from Volkswagen at a 7.5% premium to the placement price of the preferred shares.

The would give the Porsche and Piech families, which control Porsche SE, a blocking minority in the listed carmaker that was founded by their ancestor Ferdinand Porsche in 1931.

Volkswagen said it would propose that shareholders, which apart from Porsche SE include Qatar and the German state of Lower Saxony, receive 49% of the gross proceeds the carmaker will generate via the sale of preferred and ordinary shares.

Qatar, which owns 14.6% in Volkswagen and 17% of its voting rights, would also become a strategic investor in Porsche AG’s preferred shares in case of an IPO, Volkswagen said.