By Stefania Palma in Rome and Mercedes Ruehl in Singapore On Feb 21, 2022 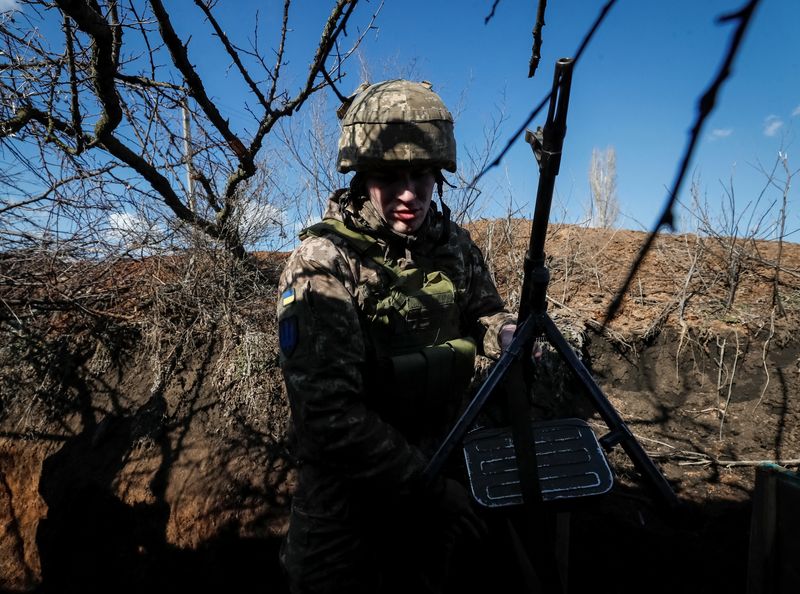 © Reuters. A Ukrainian service member holds a machine gun in a trench at a position on the front line near the village of Travneve in Donetsk region, Ukraine February 21, 2022. REUTERS/Gleb Garanich

(Refiles to fix spelling of dateline)

TRAVNEVE, Ukraine (Reuters) – Government troops in front-line trenches in Ukraine’s east said on Monday heavy weapons fire from Russian-backed separatists had intensified to provoke all-out conflict amid fears of Russia seeking a pretext for a full-scale invasion of Ukraine.

Ukrainian troops have battled Russian-backed forces in the Donetsk and Luhansk regions bordering Russia since 2014 in a conflict that Ukraine’s leadership says has killed 15,000 people. A ceasefire deal in 2015 staunched the worst fighting, but shelling has intensified along the “line of contact” since last week as Russia has massed forces along Ukraine’s borders.

Western governments have accused the Kremlin of preparing to fabricate a pretext for a military offensive into Ukraine by blaming Kyiv for attacks and relying on pleas for help from separatist proxies.

“In the last few days it has become very hot (dangerous) here,” a Ukrainian soldier, who identified himself by Chamomile, his nom de guerre, said while giving Reuters a tour through fortified trenches in the government-controlled Trasneve sector.

“They shoot at us everywhere along the front, with heavy mortars, 120-calibre, 150-calibre. It has become much more dangerous here,” he said.

“It’s probably in order to provoke us, so that we answer their fire. And they might – well I’m guessing here – want to provoke us to a full-blown war,” he said, a sign behind him reading: “Warning: Sniper.”

Russia denies any plan to attack its neighbour but has threatened unspecified “military-technical” action unless it receives sweeping security guarantees, including a promise that Ukraine will never join NATO.

Another Ukrainian serviceman who went by his nom de guerre of Hurricane said separatist forces appeared intent on reasserting the menace of their heavy weaponry.

“…They are always ready to provoke us, provoke us more and thus blame us for their actions…”We can expect anything from them after eight years’ experience of war. Anything can happen. We are always ready for the worst, and hope for the best.”

(Refiles to fix spelling of dateline)

Stefania Palma in Rome and Mercedes Ruehl in Singapore