By Benjamin Parkin in New Delhi and Mercedes Ruehl in Singapore On Mar 5, 2022 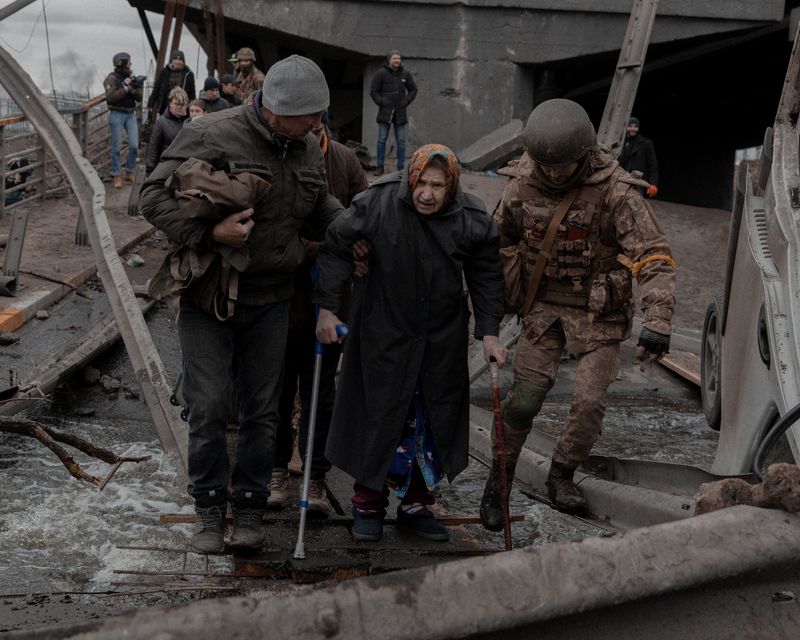 © Reuters. An elderly woman is helped while crossing a destroyed bridge as she tries to leave the city of Irpin, in the Kyiv region, Ukraine March 5, 2022. Jedrzej Nowicki/Agencja Wyborcza.pl via REUTERS

By Pavel Polityuk and Aleksandar Vasovic

LVIV/KYIV, Ukraine (Reuters) -The number of refugees fleeing Ukraine was expected to reach 1.5 million on Sunday as Russia’s attack continued for an 11th day and Ukraine pressed for further Western help, including more sanctions and weapons.

Moscow and Kyiv traded blame over a failed ceasefire on Saturday that would have let civilians flee Mariupol and Volnovakha, two southern cities besieged by Russian forces. Ukrainians who could escape spilled into neighbouring Poland, Romania, Slovakia and elsewhere.

Ukrainian negotiators said a third round of talks with Russia on a ceasefire would go ahead on Monday, although Moscow was less definitive.

In a televised address on Saturday night, Ukraine’s President Volodymyr Zelenskiy called on people in areas occupied by Russian troops to fight.

“We must go outside and drive this evil out of our cities,” he said, vowing to rebuild his nation.

British military intelligence said on Sunday that Russian forces were targeting populated areas in Ukraine but that the strength of resistance was slowing their advance.

“The scale and strength of Ukrainian resistance continue to surprise Russia,” British military intelligence said in an update.

Russia has repeatedly denied that it is targeting civilian areas.

Russian President Vladimir Putin, who launched what he calls a “special military operation” on Feb. 24, reiterated that he wanted a neutral Ukraine that had been “demilitarised” and “denazified,” and likened Western sanctions “to a declaration of war,” adding: “Thank God it has not come to that.”

Ukraine and Western countries have decried Putin’s reasons as a baseless pretext for the invasion and have imposed sweeping sanctions aimed at isolating Moscow and crippling its economy.

Ukraine’s Foreign Minister Dmytro Kuleba, after meeting with U.S. Secretary of State Antony Blinken at the Ukraine-Poland border, said he expected new sanctions and weapons for Ukraine in coming days.

The United States has said it would give Ukraine more weapons and has repeatedly warned it could escalate sanctions, with President Joe Biden seeking $10 billion in emergency funding to respond to the crisis.

Washington is working with Poland as Warsaw considers whether to provide fighter jets to Ukraine, a White House spokesperson said.

Zelenskiy asked for help securing aircraft from European allies in a video call with U.S. lawmakers. He also called again for more lethal aid, a ban on Russian oil, a no-fly zone and an end to Visa Inc (NYSE:) and MasterCard Inc privileges in Russia, U.S. media reported.

Visa and Mastercard (NYSE:) later said they would suspend credit card operations in Russia, the latest in a dramatic series of corporate pullbacks over the invasion.

NATO, which Ukraine wants to join, has resisted Zelenskiy’s appeals to impose a no-fly zone over his country, saying it would escalate the conflict outside Ukraine.

Seeking to mediate, Israeli Prime Minister Naftali Bennett met Putin at the Kremlin on Saturday and later spoke to Zelenskiy.

“We continue dialogue,” Zelenskiy tweeted after the call.

Turkish President Tayyip Erdogan is expected to talk with Putin on Sunday. Turkey, a NATO member, shares a maritime border with Ukraine and Russia in the Black Sea.

Russia was warning the EU and NATO again to stop the “pumping of state-of-the-art weapons systems” into Kyiv, foreign ministry spokesperson Maria Zakharova said, according to RIA.

Russian media cited an unidentified source on Sunday as saying that Ukraine was close to building a plutonium-based “dirty bomb” nuclear weapon, although the source cited no evidence.

Shortly before the invasion, Putin said in a grievance-filled speech that Ukraine was using Soviet know-how to create its own nuclear weapons, and that this was tantamount to preparation for an attack on Russia.

Ukraine’s government has said it had no plans to rejoin the nuclear club, having given up its nuclear arms in 1994 following the break-up of the Soviet Union.

Russia’s Defence Ministry said its forces were carrying out a wide-ranging offensive in Ukraine and had taken several towns and villages, Russian news agency Interfax said.

The Ukrainian armed forces said on Sunday they were conducting a number of defensive operations, including in the eastern part of the Donetsk district, in Slobozhansky, and the city of Chernihiv.

A series of blasts were heard overnight in Kharkiv, the second-largest city, Ukrainian media reported.

Ukraine’s military said it had shot down 88 Russian aircraft and helicopters so far and captured some pilots. Reuters could not corroborate the claim.

The International Monetary Fund warned the conflict would have a “severe impact” on the global economy, driving up energy and grain prices. It said it would weigh Kyiv’s request for $1.4 billion in emergency financing as early as this week.

‘HELP US IF YOU CAN’

In Mariupol, which has been encircled by Russian forces and shelled for days, the situation was grim.

“We can’t collect all the bodies on the street,” Deputy Mayor Sergei Orlov told CNN, saying it was impossible to count civilian deaths there.

Medical charity Medecins Sans Frontieres said it was rushing more emergency supplies to Ukraine as many hospitals were facing shortages.

Heavy shelling was heard in the background as residents of Volnovakha tried to flee.

“Help us if you can, we all want to live, we have kids, husbands, we are mothers and fathers, we are also people,” said one local, Larisa. “Where shall I go?”

The World Health Organization said 249 civilians had been killed and 553 injured as of Thursday, when the number of refugees was 1.2 million and 160,000 people had been internally displaced. But it added the toll was likely much higher.

The U.N. refugee agency estimated the number of refugees could swell to 4 million by July.

Demonstrations were planned on Sunday in Washington and elsewhere after jailed Kremlin critic Alexei Navalny called for worldwide protests on March 6 against the war. Protests were held in Chile, Paris and Israel on Saturday.

“They’re so young”: Residents of Ukrainian orphanage flee to safety By Reuters – Mar 06, 2022

By Andrew R.C. Marshall LVIV, Ukraine (Reuters) – More than 200 children evacuated from an orphanage in Ukraine’s conflict zone arrived in the western city of Lviv on Saturday…

(Reuters) – Russian media cited an unnamed source on Sunday as saying that Ukraine was close to building a plutonium-based “dirty bomb” nuclear weapon, although the source cited…

Benjamin Parkin in New Delhi and Mercedes Ruehl in Singapore