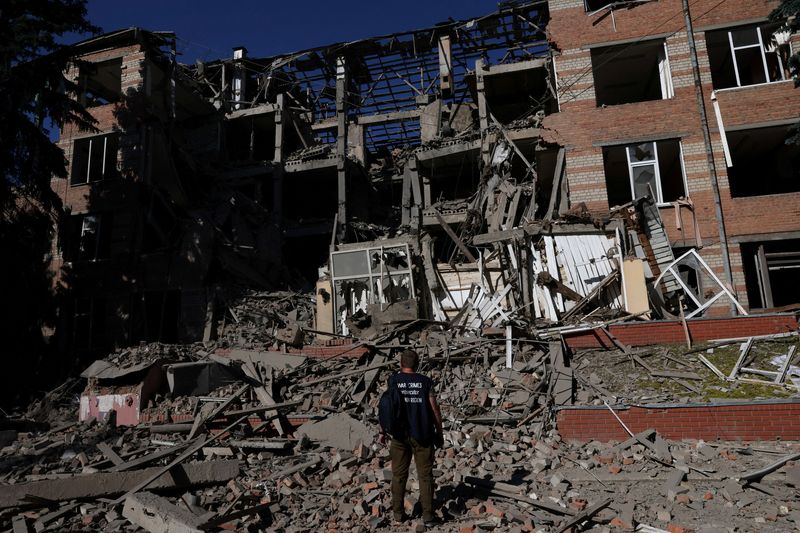 © Reuters. A worker from the war crimes prosecutor’s office takes in the damage from overnight shelling that landed on a building of Kharkiv’s Housing and Communal College as Russia’s attack on Ukraine continues in Kharkiv, Ukraine, June 21, 2022. REUTERS/Leah Milli

* Russian forces fully occupied the eastern Ukrainian city of Sievierodonetsk on Saturday, both sides said, confirming Kyiv’s biggest battlefield setback for more than a month following weeks of some of the war’s bloodiest fighting.

* Russian missiles struck a residential building and the compound of a kindergarten in central Kyiv on Sunday, killing one person and wounding five more, officials said, as Moscow stepped up its air strikes on Ukraine for a second day.

* U.S. President Joe Biden told allies “we have to stay together” against Russia, as world leaders met on Sunday at a G7 summit in the Bavarian Alps that will be dominated by war in Ukraine and its painful impact on food and energy supplies across the globe.

* Russia edged closer to default on Sunday amid little sign that investors holding its international bonds had received payment, heralding what would be the nation’s first default in decades.

* British Prime Minister Boris Johnson and French President Emmanuel Macron agreed to provide more support for Ukraine in its war with Russia, Johnson’s office said on Sunday as the leaders met on the sidelines of a Group of Seven summit.

* Indonesian President Joko Widodo said on Sunday he will urge his Russian and Ukrainian counterparts to open room for dialogue during a peace-building mission to the countries because “war has to stop and global food chains need to be reactivated”.

* “At this stage of the war it’s spiritually difficult, emotionally difficult … we don’t have a sense of how long it will last, how many more blows, losses and efforts will be needed before we see victory is on the horizon” – Ukrainian President Volodymyr Zelenskiy.

* “We can get through all of this and come out stronger. Because Putin has been counting on it from the beginning that somehow the NATO and the G7 would splinter. But we haven’t and we’re not going to.” – U.S. President Joe Biden.

Saudi Arabia stocks higher at close of trade; Tadawul All Share up 1.79%

6 Ideas to Help Parents Save on Child Care