By William Langley and George Russell in Hong Kong On May 19, 2022 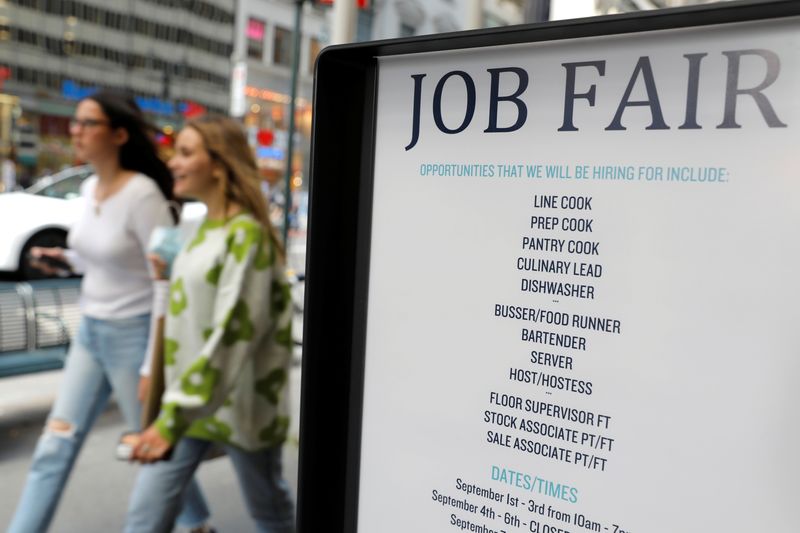 © Reuters. FILE PHOTO: Signage for a job fair is seen on 5th Avenue after the release of the jobs report in Manhattan, New York City, U.S., September 3, 2021. REUTERS/Andrew Kelly

WASHINGTON (Reuters) – New claims for U.S. unemployment benefits unexpectedly rose last week, but the labor market remains tight amid worker shortages, with the number of Americans on jobless rolls at its lowest since 1969 in early May.

Initial claims for state unemployment benefits increased 21,000 to a seasonally adjusted 218,000 for the week ended May 14, the highest level since January, the Labor Department said on Thursday. Economists polled by Reuters had forecast 200,000 applications for the latest week.

Though claims have been largely treading water since hitting more than a 53-year low of 166,000 in March, the labor market is rapidly tightening and generating strong wage gains that are helping to fan overall inflation in the economy.

The U.S. central bank has raised its policy interest rate by 75 basis points since March. The Fed is expected to hike the overnight rate by half a percentage point at each of its next meetings in June and July.

There were a record 11.5 million job openings at the end of March. Claims are down from an all-time high of 6.137 million in early April 2020.

Last week’s data covered the period during which the government surveyed employers for the nonfarm payrolls portion of May’s employment report. Claims rose between the April and May survey period. Payrolls increased by 428,000 in April, the 12th straight month of employment gains in excess of 400,000.

Data next week on the ranks of the unemployed in mid-May, will shed more light on the state of job growth this month.

The number of people receiving benefits after an initial week of aid fell 25,000 to 1.317 million during the week ending May 7. That was the lowest level for the so-called continuing claims since December 1969.