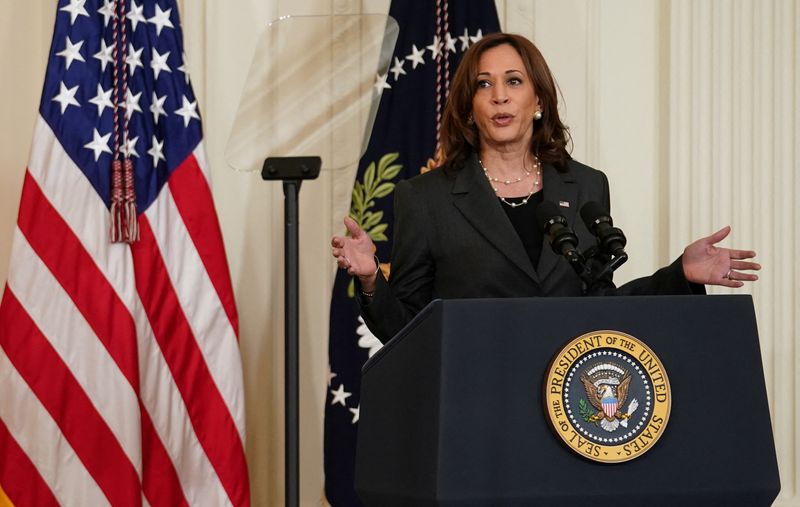 © Reuters. FILE PHOTO: U.S. Vice President Kamala Harris speaks ahead of President Joe Biden’s signing of an executive order to reform federal and local policing on the second anniversary of the death of George Floyd, during an event at the White House in Washington

LOS ANGELES/WASHINGTON (Reuters) -U.S. Vice President Kamala Harris has pooled $3.2 billion in corporate pledges aimed at addressing some of the economic factors driving migration from Central America, her office said on Tuesday, lending impetus to measures to be discussed at the Summit of the Americas this week.

The new commitments from U.S. companies, including Visa Inc (NYSE:) and apparel maker Gap Inc (NYSE:), were announced a day before President Joe Biden formally opens the Los Angeles gathering, which has been marred by controversy over the exclusion of Cuba, Venezuela and Nicaragua.

The corporate pledges form a major part of Biden’s plan to address “root causes” of migration from Guatemala, Honduras and El Salvador, a region known as the Northern Triangle. Curbing irregular migration is a top priority for Biden at a time when record numbers of people are trying to enter the United States at the Mexican border.

Republicans, who hope to take control of the U.S. Senate and House of Representatives in the November mid-term elections, have fiercely criticized the Democratic president for reversing the restrictive immigration policies of former Republican President Donald Trump.

The latest funding commitments announced by Harris exceed $1.9 billion, adding to $1.2 billion in pledges made in December. They are intended to create jobs, expand access to the internet and bring more people into the formal banking system, officials said.

Biden, who travels to Los Angeles on Wednesday to open the summit with a policy speech, will promote a new economic “partnership” for the Western Hemisphere building on existing trade agreements, U.S. officials said. He also plans to preview a “declaration” on migration to be announced on Friday that officials say will include specific commitments from leaders to address the problem.

Even as he grapples with pressing concerns such as mass shootings, high inflation and the Ukraine war, the Democratic president wants to use the summit to repair Latin America relations damaged under Republican predecessor Trump, and to counter China’s growing influence in the region.

But the dispute over the guest list has raised questions about prospects for meaningful agreements.

U.S. efforts to stem migration from the Northern Triangle have been hampered by corruption, with projects likely worth millions shelved and some private sector engagement stalled.

Further complicating matters, the presidents of Guatemala and Honduras have signaled they will not attend the summit and will instead send other officials. It was unclear whether El Salvador’s president, Nayib Bukele, would attend; the White House’s official guest list shows his foreign minister as head of the delegation.

Several thousand migrants, many from Venezuela, set off from southern Mexico on Monday on a journey to the United States border timed to coincide with the summit.

At least 6,000 people, according to Reuters witnesses, left the city of Tapachula, near Mexico’s border with Guatemala.

The latest corporate pledges include $270 million from Visa focused on bringing 6.5 million people into the formal banking system, and $150 million from Gap to increase materials sourced from the region.

The other firms span a variety of sectors, including auto parts, agriculture, telecommunications and digital services.

Harris, in a speech in Los Angeles on Tuesday, said the $3.2 billion investment would have “direct impact on the quality of life” for millions of people in the Northern Triangle.

A CEO summit running parallel to the leaders’ gathering could yield commitments for further investment in economically troubled Latin America, which has been hit hard by the COVID-19 pandemic and is struggling to recover.

Harris also announced an initiative with the private sector that aims to connect 1.4 million women to the financial system and train more than 500,000 women and girls in job skills.

Despite friction over summit invitations, most leaders in the Americas plan to attend. White House officials insist the controversy will blow over and the event – the first hosted by the United States since the first such gathering in 1994 – will be a success.

But before heading to the summit, Mexican Foreign Minister Marcelo Ebrard, in a newspaper op-ed, accused the United States of being “inconsistent, if not contradictory” for refusing to invite Communist-ruled Cuba and leftist-led Venezuela and Nicaragua while engaging with non-democratic governments in other regions such as Southeast Asia.