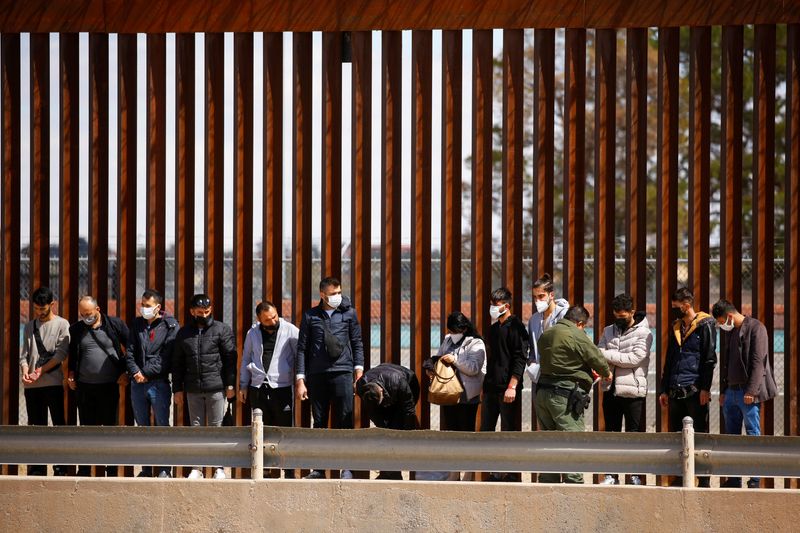 By Ted Hesson and Mica Rosenberg

WASHINGTON (Reuters) -The United States will end a sweeping, pandemic-related expulsion policy that has effectively closed down the U.S. asylum system at the border with Mexico, U.S. health officials said on Friday, arguing it was no longer needed to protect public health.

The Title 42 order will remain in effect until May 23 to allow border officials time to prepare for its termination and to ramp up COVID-19 vaccines for arriving migrants, the Centers for Disease Control and Prevention (CDC) said in a 30-page order.

“After considering current public health conditions and an increased availability of tools to fight COVID-19 (such as highly effective vaccines and therapeutics), the CDC Director has determined that an Order suspending the right to introduce migrants into the United States is no longer necessary,” the CDC said in a separate statement.

The order was originally issued in March 2020 as countries around the world shuttered their borders amid COVID-19 fears and more than a million migrants and asylum seekers have been rapidly expelled under the policy since then.

The formal announcement comes after Reuters and other news outlets reported details of the plan on Wednesday.

U.S. President Joe Biden, a Democrat, kept Title 42 in place after taking office in January 2021 despite fierce criticism from his own political party and campaign promises to reverse the restrictive immigration policies of his Republican predecessor, Donald Trump.

Leading Democrats, medical experts and the United Nations criticized Title 42, saying it expels migrants to dangerous places in Mexico, denies them their legal right to request asylum and that scientific evidence does not support its stated goal of limiting the spread of the virus.

Republicans have blasted Biden this week, saying lifting the pandemic restrictions would encourage more migrants to enter illegally at a time when border crossings are already breaking records.

Guatemala’s government said on Friday that it expects the number of Guatemalans seeking to migrate to rise after the U.S. government ends its Title 42 expulsion policy.

U.S. Department of Homeland Security (DHS) officials on a call with reporters on Friday said they are setting up additional temporary facilities at the border to handle more migrants and are coordinating efforts across various agencies.

DHS has also already redeployed more than 600 law enforcement officers to the border in anticipation of the changes.

“Nonetheless, we know that smugglers will spread misinformation to take advantage of vulnerable migrants,” Homeland Security Secretary Alejandro Mayorkas said in a statement. “Let me be clear: those unable to establish a legal basis to remain in the United States will be removed.”

The Biden administration rolled out a major regulation last week that aims to speed up asylum processing and deportations at the U.S.-Mexico border and which is set to take effect in late May, close to when Title 42 is set to end.

At the same time the administration could “employ in much greater numbers” another Trump-era policy known as the Migrant Protection Protocols (MPP), said a DHS official on the call. The program makes asylum seekers wait in Mexico for U.S. court hearings. The Biden administration tried to end MPP but was compelled by a U.S. judge to reinstate it.

Several migrants in a nearly 2,000-person encampment in Reynosa, Mexico, who have been waiting at the border for months, told Reuters on Thursday they were hopeful the order would be lifted so they could legally claim asylum in the United States.

Hilda Gonzalez, 34, a migrant from Guatemala, has spent eight months at Reynosa camp with her eight-year-old daughter and ten-year-old son.

“My plan is to stay here until we can seek asylum,” said Gonzalez, who did not detail why she fled. “It’s better to stay here, sleeping on the ground, than going back home. If we’re here, it’s because we can’t return.”