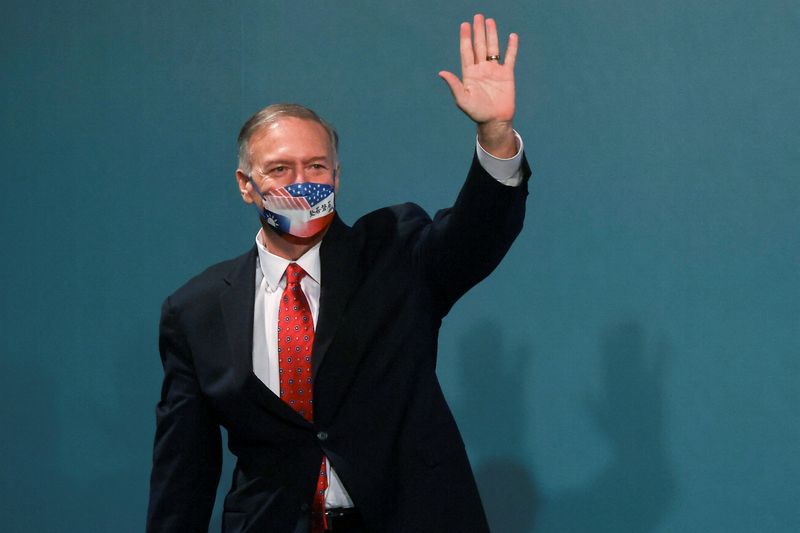 TAIPEI (Reuters) – The United States should formally recognise Taiwan as a country, former Secretary of State Mike Pompeo said on Friday during a speech in Taipei.

“The United States government should immediately take necessary and long overdue steps to do the right and obvious thing: that is to offer the Republic of China, Taiwan, America’s diplomatic recognition as a free and sovereign country,” Pompeo said in a speech organised by a Taiwan think-tank.

Washington ended formal diplomatic relations with Taiwan in 1979 when it recognised the People’s Republic of China.

While Taiwan’s official name is the Republic of China, politicians often add “Taiwan” in their public comments.

“While the United States should continue to engage with the People’s Republic of China as a sovereign government, America’s diplomatic recognition of the 23 million freedom-loving Taiwanese people and its legal, democratically-elected government can no longer be ignored, avoided, or treated as secondary,” Pompeo said.

Pompeo’s comments cross a sensitive red line for China, which claims Taiwan as its own territory and has never renounced the use of force to bring it under Chinese control.

China says Taiwan is the most important and sensitive issue in its relations with Washington.

China placed sanctions on Pompeo when he left office at the end of the Trump presidency last year, angered by his repeated criticism of the country, especially its ruling Communist Party, and support for Chinese-claimed Taiwan.

He met Taiwan President Tsai Ing-wen on Thursday, who bestowed a presidential honour on him.

The Donald Trump administration gave strong backing to Taiwan, despite the lack of formal diplomatic ties, including high-profile arms sales and visits by top U.S. officials to Taipei.

China has stepped up its military and diplomatic pressure against Taiwan over the past two years, seeking to force the island to accept its sovereignty.

Taiwan’s democratically-elected government says it wants peace but will defend itself if attacked, and that only the island’s people have the right to decide their future.

“Taking over Taiwan, a necessary mission, is not only to boost Xi’s egomaniacal claim of greatness, but indeed to solidify it,” Pompeo said.