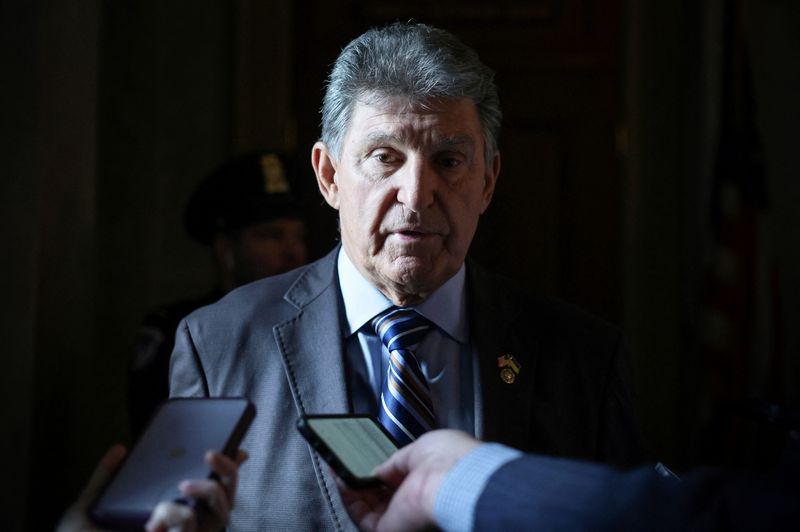 By Trevor Hunnicutt and Jarrett Renshaw

WASHINGTON (Reuters) – Key Senate Democrats are working to revive U.S. President Joe Biden’s legislative agenda with a current focus on energy, environment, climate and tax reform rather than the social safety net, according to three people familiar with the matter.

Plans to revive the “Build Back Better” legislation now revolve around talks between Senate Majority Leader Chuck Schumer and the key Democratic swing vote in the chamber, Senator Joe Manchin of West Virginia, the people said.

Manchin, who stymied earlier attempts to pass the bill over concerns about the deficit and inflation, has signaled he could support some climate provisions in a trimmed down version of the bill, including a fee on emissions of the greenhouse gas methane and a carbon border tax, according to two of the people.

The lawmakers hope to resolve the talks on the legislation by the end of June before shifting focus to campaigning ahead of the November midterm elections for control of Congress.

Manchin’s spokesperson, Sam Runyon, did not confirm the reporting, but said the senator “remains seriously concerned about the financial status of our country and believes fighting inflation by restoring fairness to our tax system and paying down our national debt must be our first priority.”

Manchin has said publicly that the only deadline to pass a spending bill is Sept. 30.

Biden, facing political pressure near his lowest approval rating of his presidency, is eager to get any kind of deal done ahead of the elections to give Democrats something to tout as they seek votes.

Climate legislation is a major priority among many wealthy Democratic donors as well as younger voters the party needs to turn out in strong numbers.

But the deal, at this point, risks leaving much of Biden’s agenda on the cutting-room floor. Democrats are likely to be disappointed if the bill does not include new measures on prescription drug costs, free preschool and childcare, Medicare expansion and paid family leave.

Still, the United States is the closest it has ever been to imposing a carbon border tax – which seeks to level the playing field between U.S. companies facing environmental regulations at home and foreign competitors with less rigorous standards.

The tax, as outlined by lawmakers, would raise billions of dollars by levying a tariff on carbon-intensive imports, but the White House has expressed concerned that it could also raise prices on a host of consumer goods.

Republicans have attacked Biden by saying his policies are driving up inflation.

Rising consumer costs have also shifted the White House’s focus toward deficit reduction and away from larger spending plans, creating an opportunity for a deal with Manchin that seemed less likely after talks blew up in December.

Manchin’s vote is crucial for Biden by virtue of simple mathematics. The Senate is split 50-50 between Democrats and Republicans, with Biden’s party controlling it only because Vice President Kamala Harris can cast a tie-breaking vote.

That means any measure that can pass with a simple majority must attract Manchin’s support if Republicans remain united in opposition as usual.

Manchin, considered the Senate’s most conservative Democrat, previously served as governor of West Virginia, a Republican coal-producing state. He surprised Biden and presidential advisers when he announced in December he would not support the bill, later blaming White House staff.