U.S., others walk out of APEC talks over Russia’s Ukraine invasion – officials

By Hillary HoffowerJuliana Kaplan On May 21, 2022 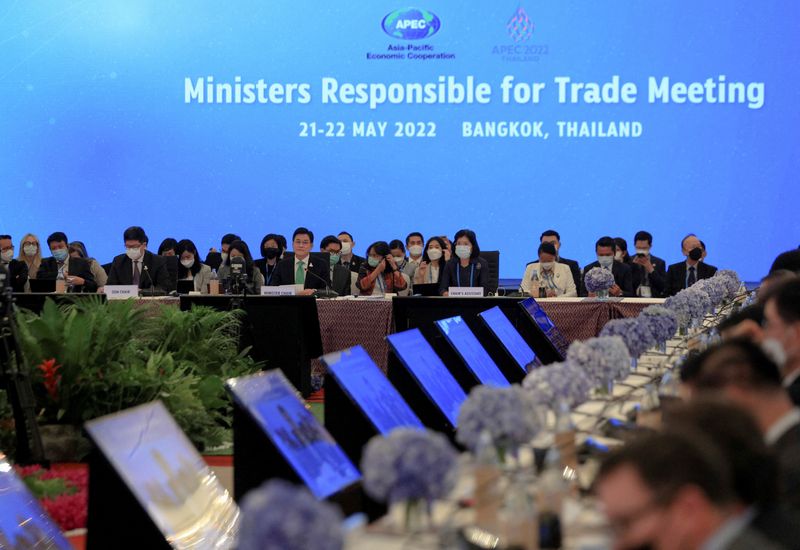 BANGKOK (Reuters) – Representatives of the United States and several other nations walked out of an Asia-Pacific trade ministers meeting in Bangkok on Saturday to protest Russia’s invasion of Ukraine, officials said.

The walkout was “an expression of disapproval at Russia’s illegal war of aggression in Ukraine and its economic impact in the APEC region,” one diplomat said.

Russia invaded Ukraine on Feb. 24, saying it aimed to demilitarise and “denazify” its neighbour. Ukraine and the West say President Vladimir Putin launched an unprovoked war of aggression, which has claimed thousands of civilian lives, sent millions of Ukrainians fleeing and caused economic fallout around the world.

Another diplomat said the five countries that staged the protest wanted “stronger language on Russia’s war” in the group’s final statement to be issued on Sunday.

“The meeting will not be a failure if (a joint statement) cannot be issued,” Thai Commerce Minister Jurin Laksanawisit told reporters, adding that the meeting was “progressing well” despite the walk out.

The walkout took place while Russian Economy Minister Maxim Reshetnikov was delivering remarks at the opening of the two-day meeting from the group of 21 economies.

The delegations from five countries that staged the protest returned to the meeting after Reshetnikov finished speaking, a Thai official said.

HDAO Launches  New Burning Mechanism To Burn 50% Of Its Tokens