By Edmund Adjapong and Shaun Dougherty and Nolan Jones On Jul 10, 2022 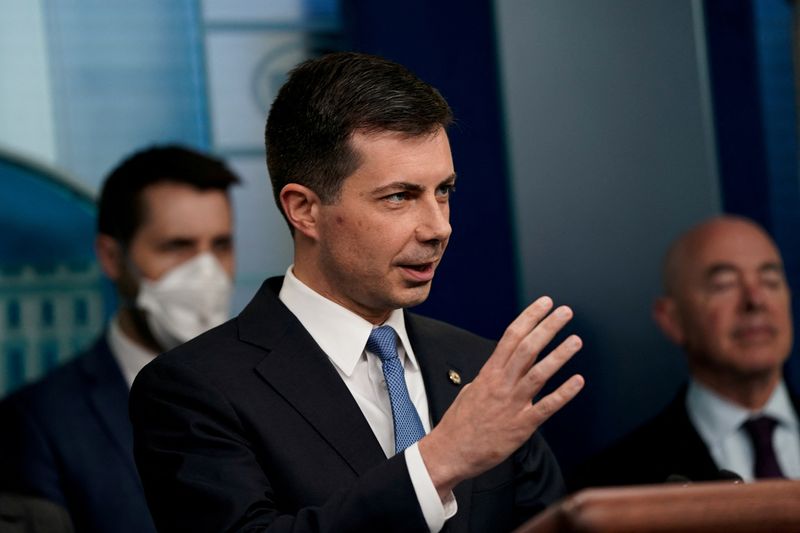 © Reuters. FILE PHOTO: U.S. Secretary of the Transportation Pete Buttigieg speaks during a briefing about the bipartisan infrastructure law at the White House in Washington, U.S., May 16, 2022. REUTERS/Elizabeth Frantz/

“We’ll collaborate with airlines when they’re ready to take steps that are positive and proactive, whether that’s improvements in pay that are helping with hiring or flexibility in customer service,” Buttigieg told Fox News Sunday. “We’re also going to enforce passenger and consumer rights.”

In September 2021, the U.S. Transportation Department (USDOT) said it had 18 pending investigations against airlines over complaints that they failed to provide timely refunds during the COVID-19 pandemic. A department official told Reuters on Sunday that 10 investigations have been “concluded and will be moving to enforcement actions in coming weeks.”

Another 10 investigations remain open. The department did not identify the airlines. Buttigieg said the actions are “to make sure that consumers and passengers are protected.”

Airlines for America, an industry group, did not immediately comment.

Air Canada in November agreed to a $4.5 million settlement to resolve a USDOT investigation into claims that thousands of air passenger refunds were delayed.

In June 2021, USDOT said it was seeking a $25.5 million fine against Air Canada over the carrier’s failure to provide timely refunds, alleging the airline continued its no-refund policy in violation of U.S. law for more than a year.

USDOT has said it plans to issue rules on refunds for consumers who are unable to travel due to government restrictions. Existing regulations do not address refund eligibility under special circumstances, such as government-imposed travel restrictions.

Last month, Buttigieg met with airline chief executives in an effort to ensure summer flight schedules are followed after a recent spate of cancellations. Airlines have canceled or delayed thousands of flights this summer, prompting anger from consumers. Airlines have blamed air traffic control staffing issues at the Federal Aviation Administration for much of the problem.