U.S. and allies to block some Russian banks from SWIFT

By James Politi and Colby Smith in Washington On Feb 26, 2022 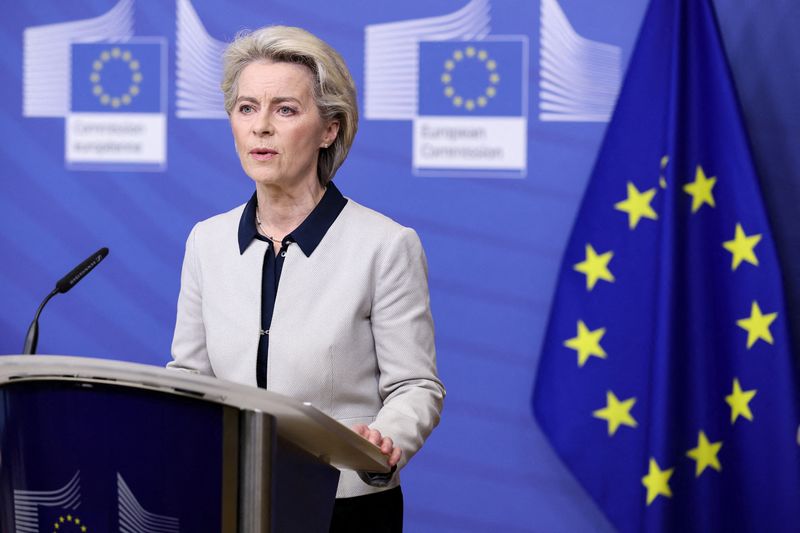 BRUSSELS/WASHINGTON (Reuters) – The United States and its allies on Saturday moved to block certain Russian banks’ access to the SWIFT international payment system in further punishment of Moscow as it continues its military assault against Ukraine.

The measures, which will also include restrictions on the Russian central bank’s international reserves, will be implemented in the coming days, the nations said in a joint statement that also vowed further action to come.

“We will hold Russia to account and collectively ensure that this war is a strategic failure for Putin,” the leaders of the European Commission, France, Germany, Italy, Great Britain, Canada and the United States wrote.

“Even beyond the measures we are announcing today, we are prepared to take further measures to hold Russia to account for its attack on Ukraine,” they added.

The move comes after the United States and its allies slapped sanctions this week on major Russian banks as well as on Russian President Vladimir Putin himself, among others, as Moscow’s forces pushed into the heart of Ukraine toward Kyiv.

“As Russian forces unleash their assault on Kyiv and other Ukrainian cities, we are resolved to continue imposing massive costs on Russia. Costs that will further isolate Russia from the international financial system and our economies,” said Ursula von der Leyen, president of the European Commission, the European Union’s executive.

The actions are aimed at preventing Putin from using $630 billion in central bank foreign currency reserves in the invasion of Ukraine and to defend a plunging rouble.

Cutting Russian banks out of the SWIFT system – the world’s main international payments network – deals a blow to Russian trade and makes it harder for Russian companies to do business.

“Putin’s government is getting kicked off the international financial system,” a senior U.S. administration official said.

It has become the principal mechanism for financing international trade. Each year, trillions of dollars are transferred using the system.

The U.S. official told reporters that if one of the banks cut off from SWIFT wants to make a payment with a bank outside of Russia, it will likely need to use a phone or fax machine. But the official said most banks worldwide would likely stop all transactions with Russian banks removed from the network.

The United States and its allies will finalize the list of banks that will by cut off from SWIFT, the official said, adding that banks already under U.S. and European sanctions would be the first ones considered.

U.S. President Joe Biden announced sanctions on Thursday that were aimed at limiting Russia’s ability to do business in dollars, euros, pounds and yen. Among the targets were five major Russian banks including state-backed Sberbank and VTB, the country’s two largest lenders.

In response to questions at the time, Biden said there was no agreement to take the SWIFT action – suggesting that the view of allies who were holdouts had since turned heavily against Putin.

The new measures announced on Saturday will also stop Russia from “using its war chest,” von der Leyen said, paralysing the assets of its central bank, freezing its transactions and making it impossible for the central bank to liquidate its assets.

“We’re disarming fortress Russia by taking this action,” the U.S. official said, adding that other actions targeting the central bank could be finalized over the weekend.

The United States slapped sanctions on Iran’s central bank in 2019 following attacks on oil facilities in Saudi Arabia that were claimed by the Iran-aligned Houthi movement in Yemen.

At the time, then-U.S. President Donald Trump said the moves, aimed at cutting off Iran’s remaining funding sources, were “the highest sanctions ever imposed on a country.”

“Sanctioning the central bank – that has got to be the biggest hammer left in the tool shed,” said Paul Marquardt, a lawyer with Davis Polk in Washington where he advises clients on U.S. sanctions.

The allies on Saturday also pledged to limit the sale of citizenship via so-called golden passports used by some wealthy Russians to gain residency in Western nations and access to their financial systems.

The partners will also launch a task force to “identify, hunt down and freeze the assets of sanctioned Russian companies and oligarchs, their yachts, their mansions, and any ill-gotten gains that we can find and freeze.”

EU foreign ministers will discuss the sanctions package at a virtual meeting on Sunday evening, the fourth time they come together in a week.

Edward Fishman, an Atlantic Council fellow who worked on Russia sanctions at the State Department during the Obama administration, said the measures announced on Saturday are a significant escalation.

By signaling their joint commitment to the moves, Fishman said, the West was “giving Putin one more chance to back down before they unleash the full range of the economic arsenal on Russia.”

Are crypto and blockchain safe for kids, or should greater measures be put in place?