By Natalie JarveyClaire Atkinson On Apr 22, 2022 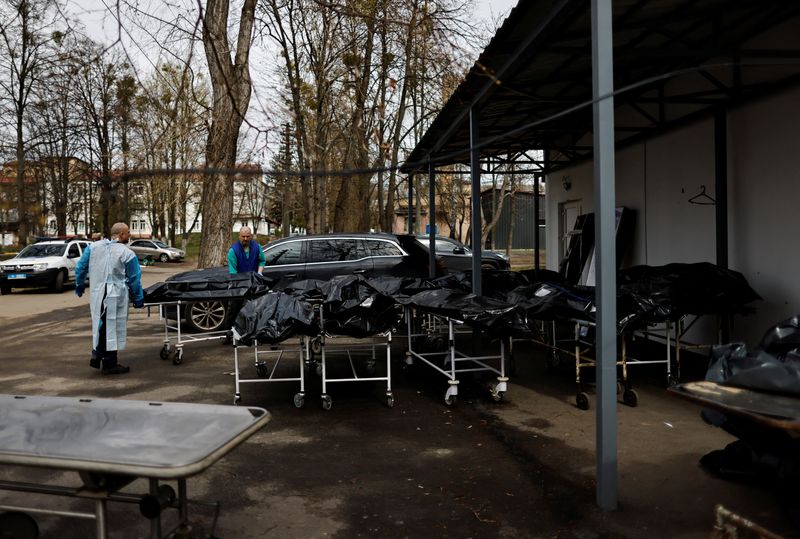 © Reuters. FILE PHOTO: Bodies waiting to be identified by their families, amid Russia’s invasion of Ukraine, are seen outside the morgue in Bucha, Kyiv region, Ukraine April 20,2022. REUTERS/Zohra Bensemra

ZURICH (Reuters) – The United Nations human rights office said on Friday there was growing evidence of Russian war crimes in Ukraine, including signs of indiscriminate shelling and summary executions, while it said Ukraine also appeared to have used weapons with indiscriminate effects.

U.N. human rights monitors in Ukraine have also documented what appeared to be the use of weapons with indiscriminate effects, causing civilian casualties, by Ukrainian armed forces in the east of the country, OHCHR said in a statement.

Russia, which describes its incursion as a “special military operation” to disarm and “denazify” Ukraine, denies targeting civilians or committing any such war crimes.

Of these, 92.3% were recorded in government-controlled territory and 7.7% in the Donetsk and Luhansk regions controlled by Russian armed forces and affiliated groups, it added.

“We know the actual numbers are going to be much higher as the horrors inflicted in areas of intense fighting, such as Mariupol, come to light,” Bachelet said.

“The scale of summary executions of civilians in areas previously occupied by Russian forces are also emerging. The preservation of evidence and decent treatment of mortal remains must be ensured, as well as psychological and other relief for victims and their relatives,” she added.

During a mission to Bucha on April 9, U.N. human rights officers documented the unlawful killing, including by summary execution, of around 50 civilians, it said.

They have received more than 300 allegations of killings of civilians in the regions of Kyiv, Chernihiv, Kharkiv and Sumy, all under the control of Russian armed forces in late February and early March, it added.

Monitors were looking into allegations of sexual violence by members of the Russian armed forces, and reports that both sides were improperly detaining civilians, it said.

However, asked about allegations of genocide – including by U.S. President Joe Biden – spokesperson Ravina Shamdasani said OHCHR had not found information to back this up.

“A lot of these legal qualifications – crimes against humanity and genocide – at the end of the day would be for a court of law to determine but, no, we have not documented patterns that could amount to that,” she told an online briefing in Geneva.