By Michael Mackenzie and James Fontanella-Khan in New York On Jun 28, 2022 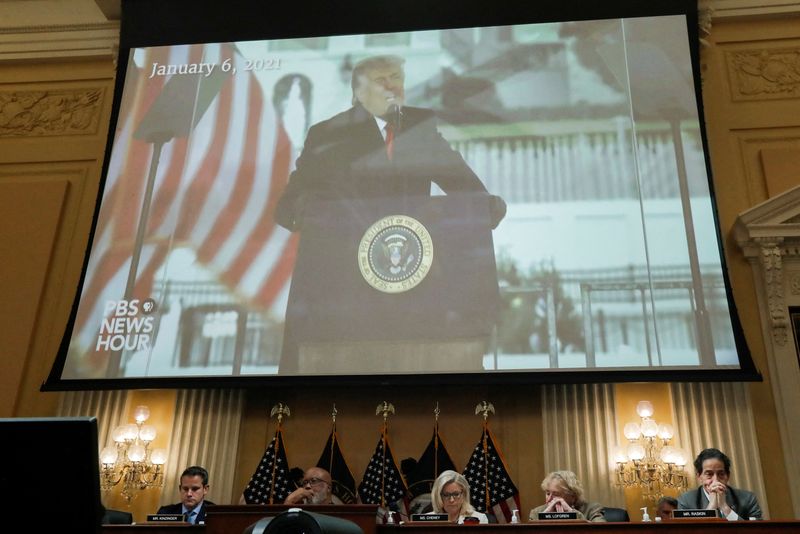 © Reuters. FILE PHOTO: A video of former U.S President Donald Trump speaking is shown on a screen during the fifth public hearing of the U.S. House Select Committee to Investigate the January 6 Attack on the United States Capitol, on Capitol Hill in Washington, U.S.

By Richard Cowan and Moira Warburton

WASHINGTON (Reuters) -Then-President Donald Trump did not care that supporters at his Jan. 6, 2021, rally preceding the assault on the U.S. Capitol were armed, including with AR-15-style rifles, a White House aide at the time testified on Tuesday.

Instead, Trump expressed anger that the Secret Service, which is charged with protecting the president, was using magnetometers to keep armed people out of the fenced-off area where he gave a fiery speech in which he repeated his false claims that his defeat was the result of fraud, Cassidy Hutchinson, an aide to Mark Meadows, then Trump’s chief of staff, told the House of Representatives select committee investigating the Jan. 6 riot.

“Take the effing mags away; they’re not here to hurt me,” Hutchinson quoted Trump as saying that morning.

The hastily called hearing marked the first time this month, during six hearings, that a White House official appeared for live testimony.

The House of Representatives committee over more than a year has been investigating the first attempt to prevent the peaceful transfer of power in U.S. history.

Committee Chairman Bennie Thompson opened the hearing saying new evidence was being presented on Tuesday “dealing with what was going on in the White House on Jan. 6 and the days prior” to the riot at the Capitol.

Thompson praised Hutchinson’s “courage” in coming forth to testify to the committee.

In video testimony during the last hearing last week, Hutchinson told the committee that Republican allies of Trump had sought White House pardons after supporting his attempts to overturn his 2020 election defeat.

Testimony at the committee’s five prior hearings has shown how Trump, a Republican, riled thousands of supporters with false claims that he lost the 2020 election to Democrat Joe Biden because of massive voter fraud.

The committee had said last week it would only reconvene publicly in July but announced a change of plans on Monday, a mere 24 hours before the start of Tuesday’s hearing.

This month’s hearings featured videotaped testimony from figures including Trump’s oldest daughter, Ivanka Trump, and his former attorney general, Bill Barr. They and other witnesses testified that they did not believe Trump’s false claims of widespread fraud and tried to dissuade him of them.

Dozens of courts, election officials and reviews by Trump’s own administration rejected his claims of fraud, including outlandish stories about an Italian security firm and the late Venezuelan President Hugo Chavez tampering with U.S. ballots.

Trump, who is publicly flirting with another White House run in 2024, denies wrongdoing and accuses the committee of engaging in a political witch hunt. He has leveled harsh criticism particularly at Representative Liz Cheney, one of just two Republicans on the nine-member committee.

The committee, sometime next month, is expected to hold one or two hearings on possible coordination of the Jan. 6 attack by right-wing extremist groups.

During the assault on the Capitol, thousands of Trump supporters smashed windows, fought with police and sent lawmakers, including Trump’s vice president, Mike Pence, fleeing for their lives.

Four people died the day of the attack, one fatally shot by police and the others of natural causes. More than 100 police officers were injured, and one died the next day. Four officers later died by suicide.