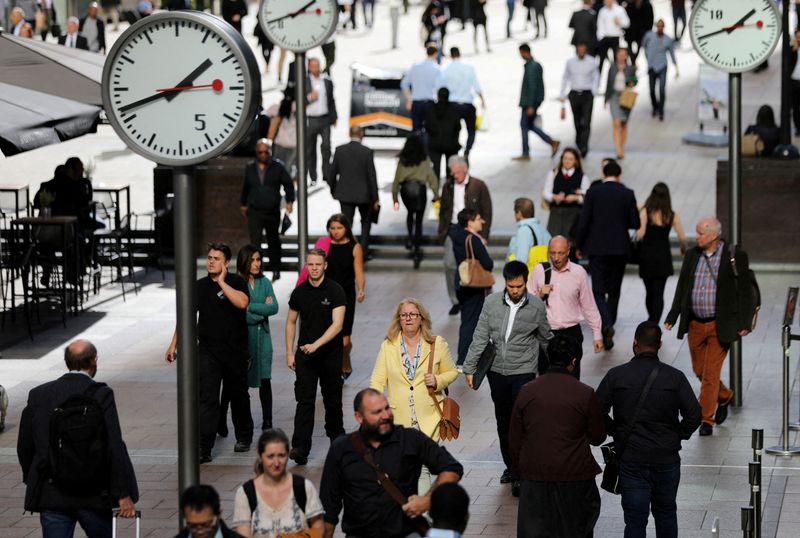 By Andy Bruce and William James

LONDON (Reuters) -Britain’s economy contracted by less than feared in June, when public holidays had been expected to exert a big drag, although sectors most exposed to a worsening cost of living crisis, like retail and restaurants, struggled.

Output for the second quarter as a whole still contracted, however, with Britain expected to enter a long downturn at the end of the year in the face of surging inflation and rising interests rates.

The Office for National Statistics said gross domestic product (GDP) fell by 0.6% in June, the biggest contraction since January 2021 but less severe than the 1.3% drop predicted by a Reuters poll of economists.

The month unusually contained two bank holidays to celebrate Queen Elizabeth’s Platinum Jubilee but most of the drag on GDP in June came from the winding-down of coronavirus-related health services.

“It’s impossible to tell whether this reflects a smaller than usual hit from the Jubilee, or evidence that the economy has considerable underlying momentum,” said Samuel Tombs, economist from consultancy Pantheon Macroeconomics.

Either way, he said, GDP is likely to rebound in July.

Friday’s data pointed to growing weakness among consumer-facing sectors of the economy as Britons deal with inflation reaching a 40-year high in the wake of the war in Ukraine.

The economy was estimated to be 0.9% above its pre-COVID pandemic level in February 2020 but consumer-facing services output was 4.9% below.

Finance minister Nadhim Zahawi said the figures pointed to “real resilience” in the private sector, but many economists expect a slide into recession.

Last week the Bank of England predicted Britain would enter a recession at the end of 2022 and not emerge until early 2024 as it raised interest rates to battle inflation, which it said was likely to exceed 13% in October.

For the second quarter as a whole, the ONS said the economy contracted by 0.1%, compared with forecasts for a 0.3% drop.

Britain has lagged behind the United States, Italy and France in recovering from the COVID-19 pandemic, comparing second quarter economic output against late 2019. Germany, however, has fared worse.

“The UK economy is sliding closer to recession and the worst is yet to come,” said Suren Thiru, economics director of the Institute of Chartered Accountants in England and Wales.

Separate ONS data showed Britain’s goods trade deficit swelled in June to 22.85 billion pounds, a three-month high, as exports to the European Union and the rest of the world cooled.

“All told, the trade data are grim, and will worsen further over the coming months, leaving sterling even more vulnerable than usual to any reduction in the willingness of overseas investors to supply the finance needed to sustain this excessive consumption,” Tombs from Pantheon said.

BERLIN (Reuters) – Forty percent of Germans – more than ever before – expect to be worse off in a year’s time, an opinion poll published on Friday showed, highlighting households’…

By Geoffrey Smith Investing.com — The U.K. economy shrank in the second quarter for the first time in five quarters, but by a fraction less than expected, as surging inflation…

By Rozanna Latiff KUALA LUMPUR (Reuters) -Malaysia’s economy grew at its fastest annual pace in a year in the second quarter, boosted by expansion in domestic demand and resilient…

How To Buy Assets: 7 Income Producing Assets (That Everyone Should Own)