Toyota to restart Japan production from Wednesday after cyberattack on supplier 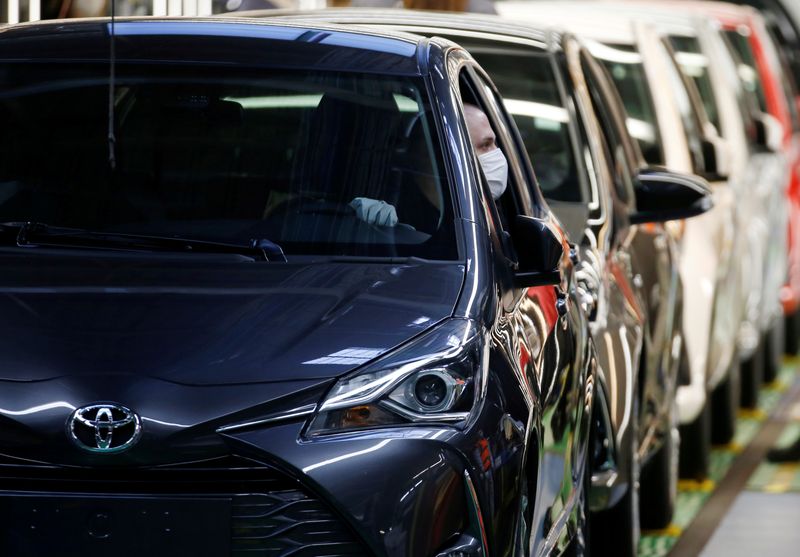 © Reuters. Employees wearing protective masks work at the Toyota Motor Manufacturing France plant as it resumes its operations after five weeks of closure during a lockdown amid the coronavirus disease (COVID-19) outbreak, in Onnaing, France, April 23, 2020. REUTERS

TOKYO (Reuters) -Japan’s Toyota Motor (NYSE:) Corp said it will restart domestic production from Wednesday, a day after all of its factories nationwide ground to a halt following a cyberattack at a parts supplier.

Production lines will be switched back on at its 14 factories across the country, Toyota said in a statement. Tuesday’s suspension hit output of around 13,000 vehicles, sparking concern about the robustness of cybersecurity in Japan Inc’s extensive supply chain.

The issue has emerged as a key area of concern in Japan, where government critics say responses have been hampered by a fractured approach to dealing with hacking threats.

Toyota supplier Kojima Industries Corp, which provides plastic parts and electronic components to the automaker, said it had discovered an error at one of its file servers on Saturday night. After rebooting the server, it confirmed it had been infected with a virus, and found a threatening message, it said in a separate statement.

The message was written in English, a Kojima spokesperson told Reuters, but declined to give further details.

The system failure at Kojima meant the supplier was unable to ship parts, forcing Toyota, which does not stockpile components at its plants, to pause production, a Toyota spokesperson said.

Kojima only supplies to Toyota and is a top-tier supplier of some parts, and a second-tier supplier of others, the Kojima spokesperson said. Toyota’s operations in Japan encompass a supply chain of 60,000 companies across four tiers.

Toyota said it would be able to resume operation by tapping into a back-up network between it and the supplier. It would take a week or two to fully restore the system, it said.

No information was available about who was behind the attack, nor the motive. It came just after Japan joined Western allies in clamping down on Russia in response to the invasion of Ukraine, although it was unclear whether the attack was related.

The incident at the Toyota supplier exposes a potential weakness for Japanese industry. While big companies have cyber security measures in place, the government is worried about small or mid-level subcontractors, the industry minister, Koichi Hagiuda, told reporters on Tuesday.

In November 2020, Japanese videogame maker Capcom, which makes games including Resident Evil, said a ransomware attack had likely compromised personal information of up to 350,000 gamers, and some of its own financial data had been stolen.

Honda Motor Co suspended some of its auto and motorcycle production globally in June 2020 after a suspected cyberattack.

Toyota shares were little changed in afternoon trade in Tokyo, while the broader market was up 1.5%.

Leslie Hook in Glasgow and Joanna S Kao in London