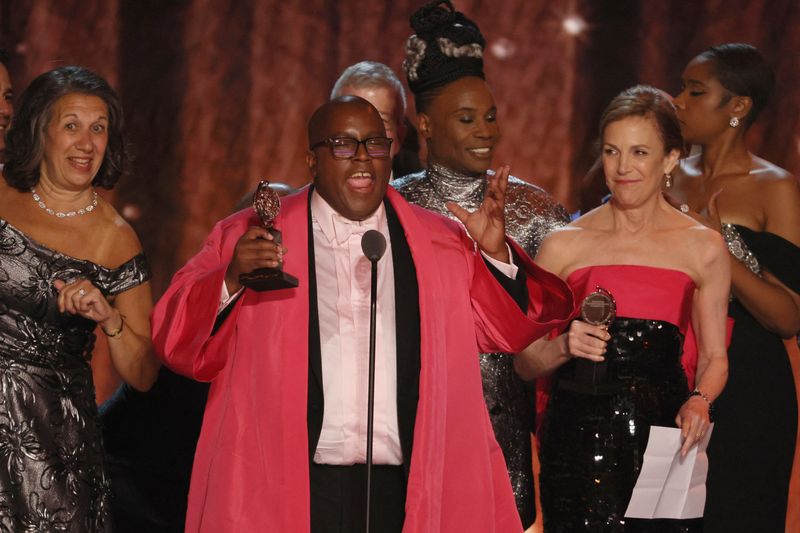 © Reuters. Michael R. Jackson speaks as the award for Best Musical is given to “A Strange Loop” at the 75th Annual Tony Awards in New York City, U.S., June 12, 2022. REUTERS/Brendan McDermid

(Reuters) – “A Strange Loop,” the story of a Black gay man and his mental struggles as a playwright, won the Tony award for best new musical on Sunday as Broadway honored its first season since the long pandemic shutdown.

“The Lehman Trilogy,” about the rise and fall of investment firm Lehman Brothers, took the best new play honor at a live ceremony held at Radio City Music Hall in New York.

“Strange Loop” triumphed over “MJ,” a crowd-pleasing musical about Michael Jackson. Star Myles Frost won best actor in a musical for playing the King of Pop.

Being on stage to accept the Tony felt like a “miracle,” said Ben Power, the writer of “Lehman Trilogy”, after COVID-19 halted preview shows of the play, for 577 days.

“In New York, even after everything, even after today, anything is possible,” Power said, adding that the play had been written as “a hymn to the city of New York.”

Simon Russell Beale, the star of “Lehman Trilogy”, won the Tony for lead actor in a play. Joaquina Kalukango took best actress in a musical for “Paradise Square.”

For best revival of a musical, Tony voters honored “Company,” the final project backed by composer and theater legend Stephen Sondheim, who died in November.

The new “Company” reverses the gender roles of the original, which centered on a single man considering his life choices as he turned 35. Producer Chris Harper thanked Sondheim “for letting us re-imagine the classic musical.”

Patti LuPone won her third Tony award for a supporting role in “Company” and thanked, among others, “all of the COVID safety people” for making Broadway’s return possible. In the audience were 150 COVID-19 safety managers who had kept shows running.

Best play revival went to “Take Me Out,” the story of a gay baseball player.

Deirde O’Connell won the Tony for lead actress in a play for “Dana H.” As she accepted her trophy, she encouraged aspiring writers to “make the weird art.”