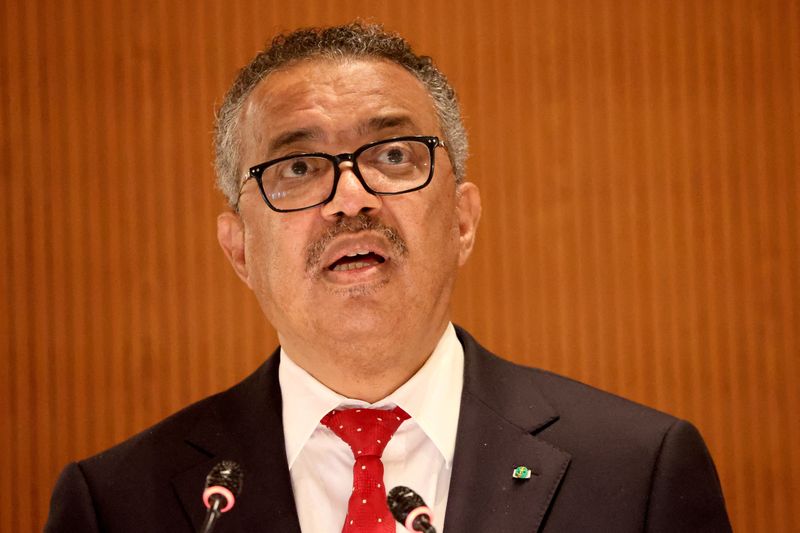 GENEVA (Reuters) – The World Health Organization’s (WHO) members re-elected Tedros Adhanom Ghebreyesus as Director General by a strong majority for another five years, the president of the World Health Assembly said on Tuesday.

The vote by secret ballot, announced by Ahmed Robleh Abdilleh from Djibouti at a major annual meeting, was seen as a formality since Tedros was the only candidate running.

Ministers and delegates took turns to shake hands and hug Tedros, a former health minister from Ethiopia, who has steered the UN agency through a turbulent period dominated by the COVID-19 pandemic. The president had to use a gavel several times to interrupt the applause.

Addressing the assembly soon after his re-election, Tedros said the WHO’s focus will be on emergency preparedness and improvement of the agency.

“This pandemic has been very unprecedented and many lessons that we should learn and we are learning. But, at the same time we cannot just pause, learn and implement…instead of pausing to learn, we’re saying while learning let’s implement.”

The newly re-elected WHO head teared up while talking about the current Ukraine crisis and the death of his younger brother from a childhood disease amidst war and poverty decades ago.

“When I visited Ukraine when I saw especially the kids..It was the image from more than 50 years ago that came to my mind, so visible, so hounding. The smell, sound and image of war. That is what I don’t want to happen to anyone.”

Several countries including Germany and the United States were quick to offer their congratulations.

However, Tedros’ second-term candidacy did not receive the support of his native Ethiopia due to friction over the Tigray conflict. Ethiopia’s envoy to the assembly made it clear that Botswana’s statement congratulating Tedros did not represent all 47 countries of the African group.