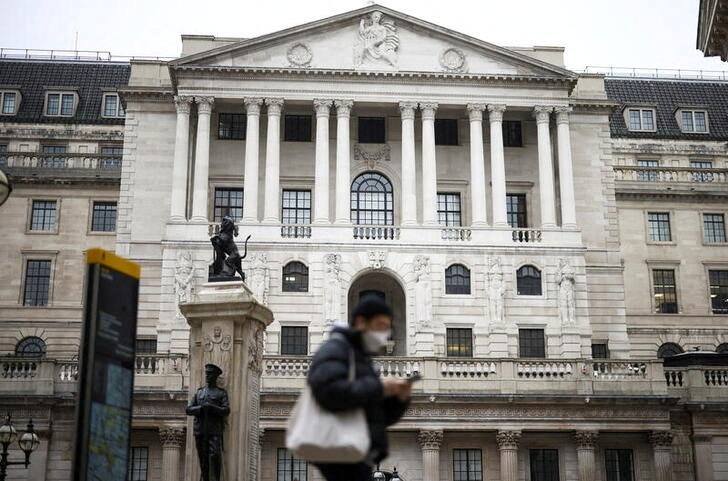 © Reuters. FILE PHOTO: A person walks past the Bank of England in the City of London financial district in London, Britain, January 23, 2022. REUTERS/Henry Nicholls/File Photo

LONDON (Reuters) -Central banks should move quickly when raising interest rates, because of the risk that persistent inflationary trends may be taking hold, Bank of England policymaker Catherine Mann said on Thursday.

“What the research shows is when there is uncertainty about persistence versus transitory nature of inflation dynamics, it’s important to front-load policy,” Mann told an event organised by Lorenzo Codogno Macro Advisors.

Mann was one of three members of the nine-strong Monetary Policy Committee who voted for a half-point increase in interest rates last month. The majority of six backed a smaller quarter-point rise to 1.25%.

The BoE has not raised interest rates by half a percentage point since it gained operational independence in 1997, and on Wednesday its chief economist, Huw Pill, repeated his call for a “steady-handed” approach to rate rises.

By contrast, Mann said the BoE should not fret about tightening too much then needing to cut rates later.

“When we think about the uniqueness of the set of shocks that have put us in the situation that we face, we would think history would be kind if there is a future policy reversal,” she said.

With household incomes squeezed by the highest inflation in 40 years, the BoE has forecast that the economy will stagnate next year and in 2024.

However, Mann said household spending would not necessarily be as weak this forecast implied.

“There’s a range of reasons that I see for aggregate consumption to have a stronger dynamic,” she said.

Households would be able to draw down on savings built up during the COVID-19 pandemic, as well as government support for energy bills worth at least 550 pounds ($659) each, she said.

Rapid tightening by the U.S. Federal Reserve tended to push up British inflation in the short run as it caused the dollar to strengthen, even if in the longer term it led to slower global growth, she added.