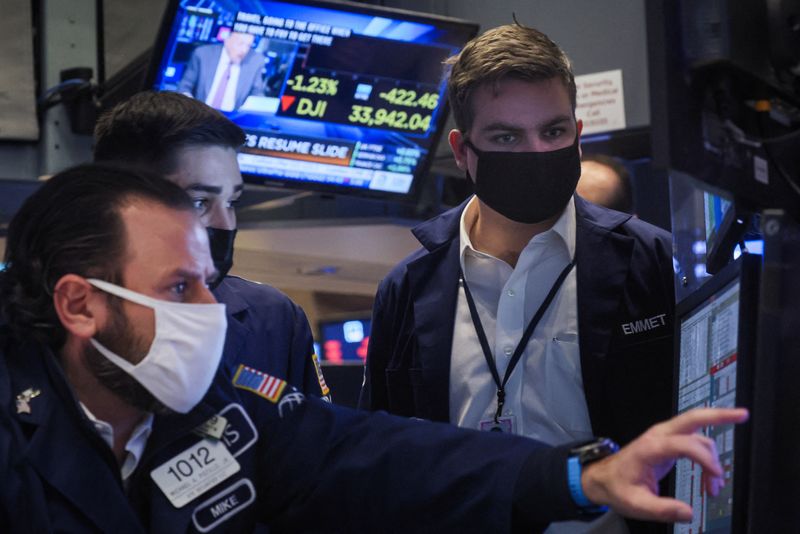 Investing.com – The S&P 500 climbed higher Tuesday, underpinned by a surge in tech and growing hopes of a de-escalation in the Ukraine-Russia conflict after Moscow pledged to reduce military operations in Kyiv.

Russia sees its pledge to reduce military activity in the Kyiv and Chernihiv areas as a means of building up trust in talks with Ukraine that could ultimately lead to an agreement that could prove key to ending the war.

There are doubts about the strength of the olive branch offered by Moscow as Russia’s progress toward Kyiv has stalled recently, and there wasn’t any mention of cutting back military operations in the South of Ukraine, where fighting has intensified.

The prospect of progress at the talks were boosted a day earlier after Ukrainian President Volodymyr Zelensky said he was open to discussing some of the Kremlin’s demands around neutrality.

Oil prices, which dominated by headlines from Ukraine and Russia, were in the red, dragging energy stocks lower as investors cooled their expectations of prolonged war disrupting energy supplies.

The growth corners of the market including tech and consumer discretionary continued to add to recent gains.

Chip stocks resumed their uptrend following a sluggish start to the week as NVIDIA (NASDAQ:) climbed following favorable commentary on the stock from Wall Street.

Elsewhere in tech, Uber Technologies (NYSE:) rallied more than 7% as the ride-hailing company is reportedly closing in on a deal with a San Francisco taxi company to include taxis from the city on its platform.

In other news, Nielsen Holdings (NYSE:) Holdings rallied 20% on reports that a group of private equity investors the ratings company for $16 billion.

FedEx (NYSE:) was up more than 3% after the logistics announced that founder and chief executive Fred Smith will step down on June 1.

Smith will be succeeded by current president and chief operating officer, Raj Subramaniam. The transition is expected to be “seamless,” Oppenheimer said.

“In recent years Mr. Smith appeared to have been ceding an increasing amount of operational and investor-facing responsibility to his top reports, particularly Mr. Subramaniam,” it added.

The move higher in stocks hasn’t taken focus away from the bond market, in which a key part of the Treasury yield curve briefly inverted, exacerbating concerns about a potential recession ahead.