By Tom Wilson and David Sheppard in London On Mar 3, 2022 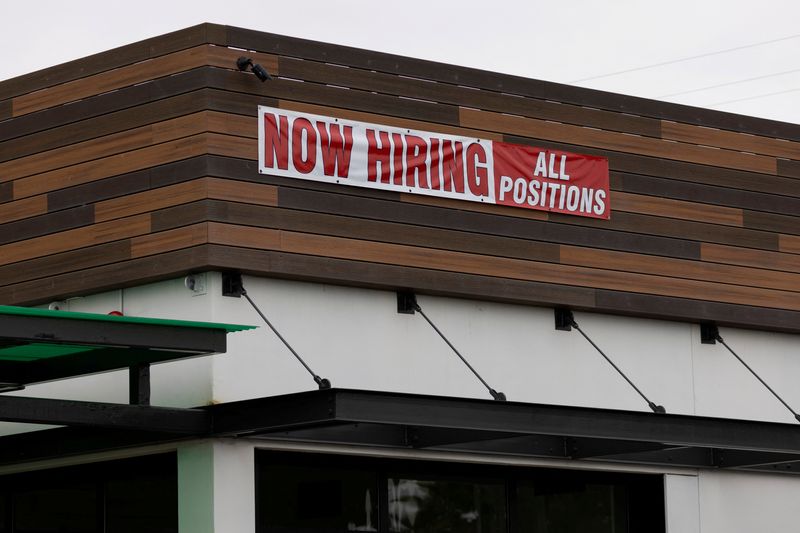 WASHINGTON (Reuters) – U.S. employers likely maintained a strong pace of hiring in February, pushing the labor market closer to maximum employment, but rising headwinds from geopolitical tensions could hurt business confidence and slow job growth in the months ahead.

The Labor Department’s closely watched employment report on Friday is expected to show labor market conditions tightening further, with the unemployment rate resuming its downward trend and a shortage of workers continuing to drive up wages.

Federal Reserve Chair Jerome Powell this week described the labor market as “extremely tight,” and told lawmakers that he would support a 25-basis-point interest rate increase at the U.S. central bank’s March 15-16 policy meeting and would be “prepared to move more aggressively” later if inflation does not abate as fast as expected.

Oil prices have surged above $100 a barrel since Russia launched a war against Ukraine last Thursday, invoking a barrage of sanctions against Moscow by the United States and its allies.

“The employment report will show the U.S. economy is healthy and continuing to move forward,” said Sung Won Sohn, a finance and economics professor at Loyola Marymount University in Los Angeles. “But geopolitical problems will push inflation higher, and have created a tremendous amount of uncertainties that will put a damper on economic growth and jobs going forward.”

The survey of establishments is likely to show that nonfarm payrolls increased by 400,000 jobs last month after rising by 467,000 in January, according to a Reuters poll of economists.

That would leave employment 2.5 million jobs below its pre-pandemic level. Economists expect all the lost jobs will be recouped this year. February payrolls estimates range from as low as a 200,000 to as high as a 730,000 jobs gain.

Payrolls increased strongly in January, despite a record 3.62 million people being absent from work in the middle of that month because of illness, when the nation was reeling from a winter wave of cases caused by the Omicron variant of COVID-19.

Infections have since declined sharply. The Census Bureau’s Household Pulse Survey showed about 7.8 million people were not at work in early February because they were caring for someone or were sick with coronavirus symptoms, down 1 million from early January.

The number of people on state unemployment benefits was the smallest in 52 years in mid-February. Also arguing for strong job gains, data from Homebase, a payroll scheduling and tracking company, showed substantial increases in the number of employees on the job as well as hours worked in mid-February.

Shift work in February recorded its largest monthly gain since the spring of 2020, another survey from workforce management software company UKG showed.

But payrolls could come in below expectations after an Institute for Supply Management survey on Thursday showed a measure of services sector employment contracted in February for the first time since last June. The ISM reported earlier this week that manufacturing employment growth slowed last month.

The Fed’s Beige Book report on Wednesday showed “widespread strong demand for workers remained hampered by equally widespread reports of worker scarcity.” There were a near record 10.9 million job openings at the end of December.

“I’m biased more towards a softer payrolls number, but with a pretty good wage figure,” said James Knightley, chief international economist at ING in New York. “All the evidence does suggest that companies are trying to recruit staff and also retain staff as well because of these high turnover statistics.”

Job gains last month were likely concentrated in the leisure and hospitality industry as well as retail and other sectors which were hardest hit by Omicron in January. Moderate gains in professional and business services employment are likely as the ISM survey showed businesses in this industry were “struggling to hire direct employees and non-employee labor.”

The unemployment rate is forecast falling to 3.9% from 4.0% in January. Economists believe the labor force participation rate, or the proportion of working-age Americans who have a job or are looking for one, likely increased last month.

With workers scarce, average hourly earnings are forecast rising 0.5% in February after increasing 0.7% in January. That would lift the year-on-year gain in wages to 5.8% from 5.7% in January. Wages were boosted in January as Omicron kept some lower hourly paid workers at home.

But that is now off the table amid worries about fallout from the Russia-Ukraine war. Economists expect as many as seven rate hikes this year.

“Indeed, the current energy price shock creates a real bind for central bankers,” said Gregory Daco, chief economist at EY-Parthenon in New York. “Given the high-inflation environment, Fed policymakers will want to balance the risk of a ‘stagflationary’ shock and a shift to a higher inflation regime with the risk of normalizing policy too rapidly and precipitating the ongoing tightening of financial conditions.”

The workweek, which was impacted by Omicron in January, is forecast increasing to 34.6 hours from 34.5 hours.