By Naomi Rovnick in London and Joe Rennison in New York On Feb 16, 2022 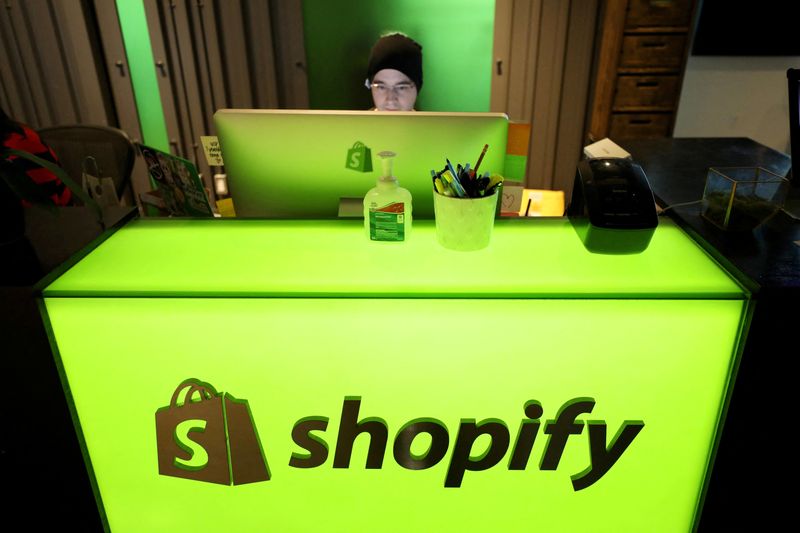 (Reuters) -Canada’s Shopify (NYSE:) Inc on Wednesday forecast a slowing pace of revenue growth in the first half of the year, and said it was ramping up spending on a network of fulfillment centers, sending its shares tumbling 18%.

The company’s forecast indicated the e-commerce boom seen during the peak of the COVID-19 pandemic was cooling as more shoppers return to stores, prompting retailers to shift their focus to brick-and-mortar operations from online.

In their quest to make the online-shopping experience more rewarding during the pandemic, small and medium retailers splurged on spiffy websites, robust networks and faster delivery using software tools and payment services provided by companies such as Shopify.

But as that growth softens, Shopify is trying to create an integrated e-commerce model that focuses on logistics and warehouses to support its main businesses.

“We are shifting the network model really to larger capacity hubs, and we want to operate more of them ourselves,” Shopify President Harley Finkelstein said.

“Being able to offer (fulfillment services) to 90% of the U.S., 2-day affordable shipping, that really is the goal.”

Shopify said it was estimating capital expenditure of $200 million in 2022 as it ramps up operations and was likely to spend about $1 billion on warehouse hubs in the following two years.

Though Shopify’s investment spending forecast for 2022 was greater than expected, its focus on fulfillment centers is a logical one, D.A. Davidson analyst Thomas Forte said.

For the fourth quarter ended Dec. 31, revenue rose 41% to $1.38 billion, compared with analysts’ estimates of $1.33 billion, according to Refinitiv data.

Excluding items, it earned $1.36 per share, 9 cents above estimates.

Shopify has lost its title of being Canada’s most valuable company by market capitalization after its shares shed more than a third of their value this year.

Naomi Rovnick in London and Joe Rennison in New York