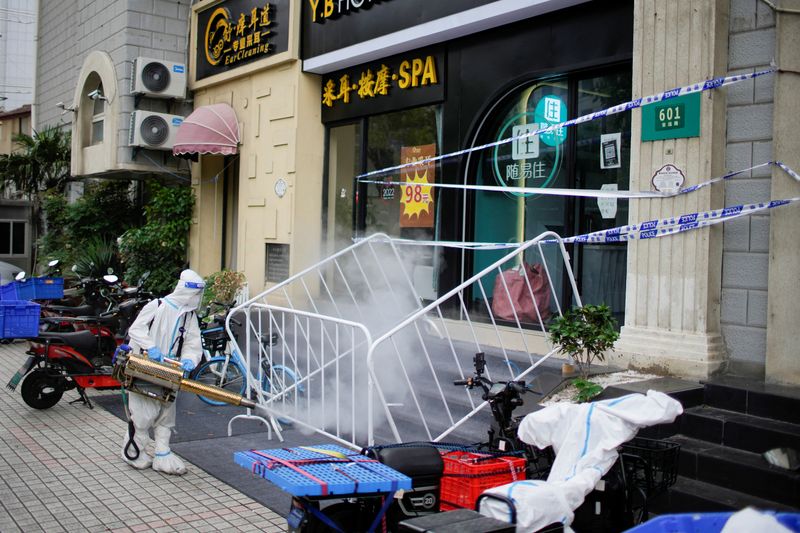 © Reuters. FILE PHOTO: A worker in a protective suit disinfects a street during lockdown, amid the coronavirus disease (COVID-19) outbreak, in Shanghai, China, May 20, 2022. REUTERS/Aly Song

By Eduardo Baptista and Laura Lin

BEIJING/SHANGHAI (Reuters) -Shanghai cautiously pushed ahead on Saturday with plans to restore part of its transport network in a major step towards exiting a weeks-long COVID-19 lockdown, while Beijing kept up its defences in an outbreak that has persisted for a month.

Shanghai’s lockdown since the beginning of April has dealt a heavy economic blow to China’s most populous city, stirred debate over the sustainability of the nation’s zero-COVID policy and stoked fears of future lockdowns and disruptions.

Unlike the financial hub, Beijing has refrained from imposing a city-wide lockdown, reporting dozens of new cases a day, versus tens of thousands in Shanghai at its peak. Still, the curbs and endless mass testing imposed on China’s capital have unsettled its economy and upended the lives of its people.

As Beijing remained in COVID angst, workers in Shanghai were disinfecting subway stations and trains before planned restoration of four metro lines on Sunday.

While service will be for limited hours, it will allow residents to move between districts and meet the need for connections to railway stations and one of the city’s two airports. More than 200 bus routes will also reopen.

Underlining the level of caution, Shanghai officials said commuters would be scanned for abnormally high body temperatures and would need to show negative results of PCR tests taken within 48 hours.

No new cases were found outside quarantined areas, down from three a day earlier, health authorities added.

The city of 25 million has gradually reopened shopping malls, convenience stores and wholesale markets and allowed more people to walk out of their homes, with community transmissions largely eliminated in recent days.

Still, Shanghai on Friday tightened curbs on two of its 16 districts. On Saturday a third district in central Shanghai increased restrictions on residents and businesses.

The authorities “urge enterprises to strictly implement safe production, which is their responsibility, especially in meeting some epidemic prevention and control requirements,” an official from the city’s emergency bureau told a news conference on Saturday.

Delta Airlines (NYSE:) said on Friday it would resume one daily flight to Detroit from Shanghai via Seoul on Wednesday.

Most of Beijing’s recent cases have been in areas already sealed up, but authorities remained on edge and quick to act under China’s ultra-strict policy.

In Fengtai, a district of 2 million people at the centre of Beijing’s counter-COVID efforts, bus and metro stations have been mostly shut since Friday and residents told to stay home.

A Fengtai resident was stocking up on groceries at a nearby Carrefour (EPA:) on Saturday, uncertain whether restrictions would continue.

“I’m not sure if I can do more shopping over the next week or so, so I’ve bought a lot of stuff today and even bought some dumplings for the Dragon Boat holiday” in early June, she said, asking not to be identified.

On Friday, thousands of residents from a neighbourhood in Chaoyang, Beijing’s most populous district, were moved to hotel quarantine after some cases were detected, according to state-run China Youth Daily.

Social media users on China’s Twitter-like Weibo (NASDAQ:) were swift to draw parallels with Shanghai, where entire residential buildings were taken to centralised quarantine facilities in response to a single positive COVID case in some instances.

While unverified accounts from residents of the Nanxinyuan neighbourhood garnered thousands of comments and shares on Weibo, a related hashtag could not be searched on the platform on Saturday, suggesting online censorship.

“Perhaps… except for Shanghai people, no one will feel for Beijing’s Nanxinyuan. However, I don’t actually know whether there are people who will see this sentence,” Shanghai-based director and actor Xie Tiantian wrote on Weibo.

Sun Shuwei, a tech startup employee, told Reuters the situation at Nanxinyuan, just 2 km (1.2 miles) from his home, has prompted him to consider leaving Beijing.

“This has left me very agitated,” Sun said.