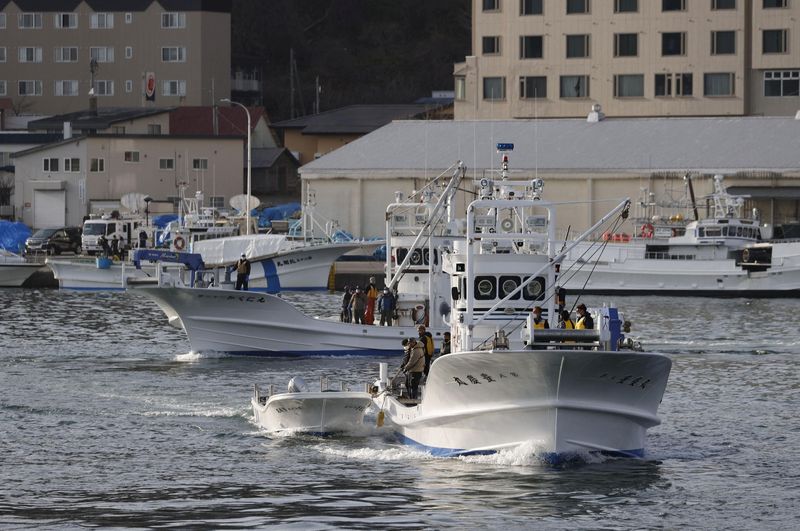 © Reuters. A fishing boat leaves from Utoro port for searching for the missing tour boat “Kazu 1” in Shari, Hokkaido Prefecture, Japan in this photo taken by Kyodo on April 24, 2022. Mandatory credit Kyodo/via REUTERS

By Kiyoshi Takenaka and David Dolan

Authorities continued to search with patrol boats, aircraft and helicopters for the remaining 16 people who had been onboard the “Kazu I” when it ran into trouble on Saturday off the Shiretoko peninsula on the island of Hokkaido.

Nine of the 10 who were found were either in the water or on nearby rocks, the coast guard said. There were 24 passengers, including two children, and two crew members on board. The children were still unaccounted for.

Drift ice can be seen in the sea around the area as late as March, and water temperatures would be around 2 to 3 degrees Celsius (36-37 Fahrenheit) at this time of year, an official at a local fishery cooperative told Reuters.

“Just a few minutes in that sort of water would start clouding your consciousness,” he said.

The area is famous for its wildlife and dramatic mountains, and boats bring tourists along the coast to spot brown bears.

The coast guard heard from the crew on Saturday afternoon that water was flooding the vessel. It was last heard from around an hour later when it contacted its operating company to say it was keeling at a 30-degree angle, Kyodo news reported.

Footage from the coast guard showed orange flotation devices emblazoned with “Kazu I” adrift at a rocky area near the peninsula. Separately, relatives were seen entering a facility where the bodies of the victims were laid. Two of them walked into the building clutching each other tightly.

The coast guard said it was not clear what had happened to the boat. No one was available for comment at the company that operated the Kazu I.

High waves and strong winds had been observed around noon on Saturday, Kyodo said.

The boat was the first tour boat to operate in the area this season, the news agency said.

It collided with a floating object in May last year, injuring three people and ran aground in shallow water shortly after leaving the port in June, Kyodo said.