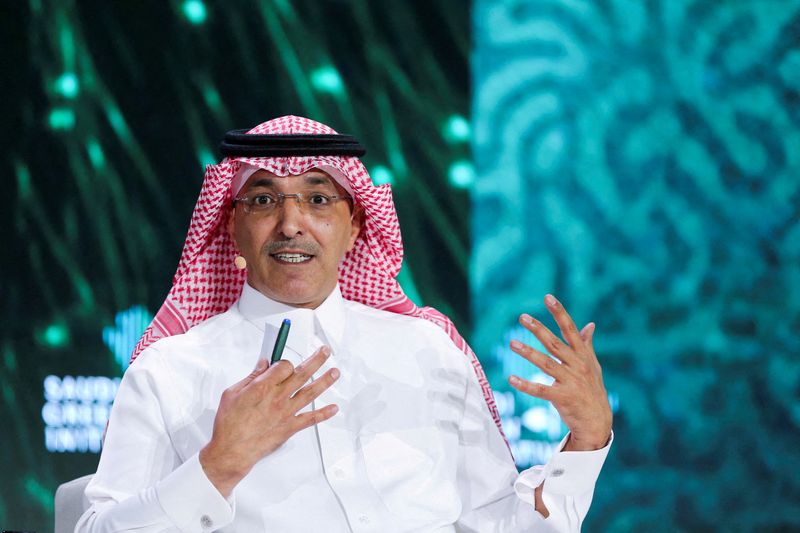 By Yousef Saba and Saeed Azhar

DUBAI (Reuters) – Saudi Arabia’s finance minister said on Monday there were no immediate plans to transfer more funds to the Public Investment Fund (PIF), the sovereign wealth fund at the centre of the kingdom’s plans to diversify its economy away from oil.

The PIF manages over $600 billion in assets, a figure that has doubled in about two years.

“I think there is no immediate plan to transfer any funds to PIF,” said Finance Minister Mohammed al-Jadaan, speaking at the World Economic Forum in Davos, Switzerland.

In 2020, the PIF got a $40 billion injection from the central bank, which Jadaan said at the time was done on an “exceptional basis”.

In February this year, Saudi Arabia transferred 4% of oil giant Saudi Aramco (TADAWUL:)’s shares, now worth $92 billion, to the PIF.

Jadaan said Saudi Arabia would, in the first quarter of next year, deploy its expected surplus from this year where it would have “the most positive impact on the economy”, including to the National Development Fund, which supports private sector investment.

“So we need to make sure we allocate enough amount of money to them,” he said.

“We have opportunities to invest with the PIF because they are actually making very good deals in their investments and doing very well, both inside Saudi and outside,” he added.

He also said foreign reserves would be looked at to consider whether they need to be bolstered.

Jadaan reiterated Saudi Arabia expects economic growth of 7.4% this year and said inflation was seen reaching between 2.1% and 2.3% by the end of 2022.

A cap on petrol prices when oil breaches $70 was helping contain inflation, he added.

“It was the end of last year we froze the price escalation of gasoline for the internal economy and households at $70. So anything above $70, the economy will not feel that heat.”

Thomas Hale in Hong Kong and Sun Yu in Jinan