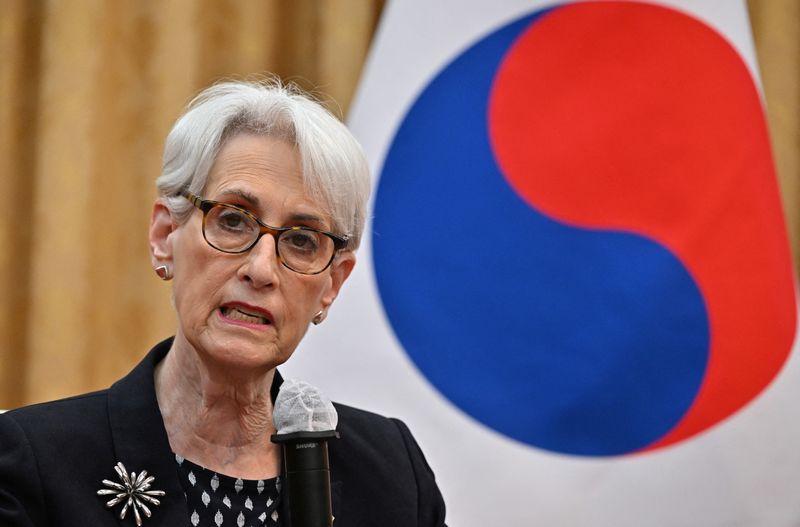 By Joori Roh and Soo-hyang Choi

SEOUL (Reuters) -South Korea and the United States staged a joint air power demonstration on Tuesday during a visit by U.S. Deputy Secretary of State Wendy Sherman, who said there would be a strong and clear response if North Korea were to conduct a nuclear test.

The demonstration, which involved 20 warplanes including F-35A stealth fighter jets, came a day after the allies fired eight surface-to-surface missiles off South Korea’s east coast in response to a barrage of short-range ballistic missiles launched by North Korea on Sunday.

“South Korea and the United States demonstrated their strong ability and determination to quickly and accurately strike any North Korean provocation,” the South Korean military said in a statement, adding the allies are closely monitoring and preparing for any further provocation by the North.

The statement came hours after Sherman met with her South Korean counterpart, Cho Hyun-dong, in Seoul to discuss North Korea. The reclusive state has staged a series of missile tests recently and some analysts believe it is preparing to resume testing nuclear weapons after a five year hiatus.

“Any nuclear test would be in complete violation of UN Security Council resolutions (and) there would be a swift and forceful response to such a test … I believe that not only ROK and United States and Japan but the entire world will respond in a strong and clear manner,” Sherman said in a news conference after the meeting. ROK is the Republic of Korea, South Korea’s official name.

“We are prepared and … we will continue our trilateral discussion (with South Korea and Japan) tomorrow,” Sherman added.

Authorities and North Korean experts have been saying for weeks that there are signs of new construction at Punggye-ri, North Korea’s only known nuclear test site.

North Korea has been suffering from its first-ever outbreak of COVID-19 in the past month, with the country reporting a total 4,198,890 people with fever symptoms as of Monday. North Korea has not confirmed the total number of people testing positive for the coronavirus.

Pyongyang has so far refused any help offered by Washington and Seoul, even as the World Health Organization says the COVID-19 situation there is deteriorating.

“We hope that (North Korean leader) Kim Jong Un will be focused on helping his people to meet this challenge of COVID-19 which we have all faced and will return to the negotiating table rather than taking provocative and dangerous and destabilising actions,” Sherman said.