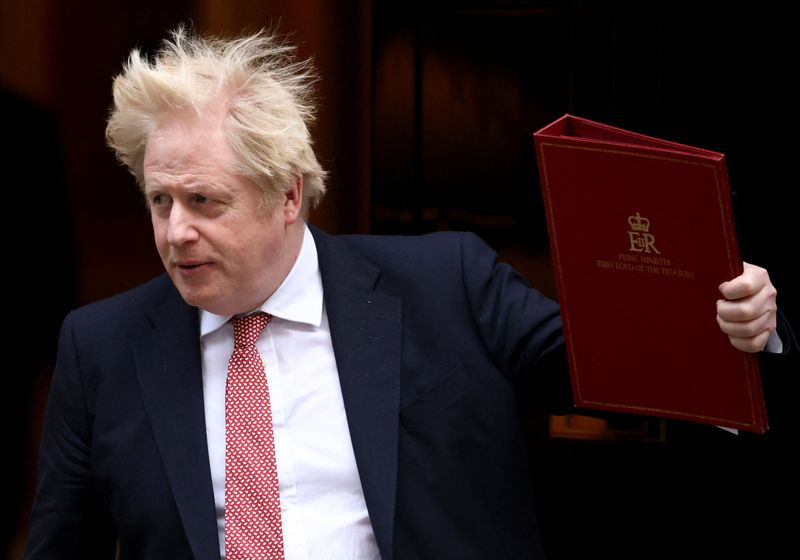 By William James and Alistair Smout

British Prime Minister Boris Johnson offered defensive support in a call with Ukrainian President Volodymyr Zelenskiy, saying while a diplomatic solution should be pursued until the last possible second, the situation was deteriorating.

“The Prime Minister told President Zelenskiy that he believed an invasion was a real possibility in the coming hours and days,” Johnson’s office said in a statement following a call between the leaders.

“He told President Zelenskiy that the UK had already drawn up sanctions to target those complicit in the violation of Ukraine’s territorial integrity, and that those measures would come into force tomorrow. The Prime Minister also said he would explore sending further defensive support to Ukraine, at the request of the Ukrainian government.”

Johnson will agree the package of immediate sanctions against Russia at an 0630 GMT meeting of the government’s crisis response committee (COBR) on Tuesday, a Downing Street spokesperson said.

Putin signed a decree recognising the independence of the regions of Luhansk and Donetsk regions while Johnson was speaking at a news conference, upping the ante in a crisis the West fears could unleash a major war.

“It’s a … flagrant violation of the sovereignty and integrity of Ukraine,” Johnson said at that news conference, prior to the call with Zelenskiy.

“It is a repudiation of the Minsk process and the Minsk agreements, and I think it’s a very ill omen and a very dark sign.”

After Putin signed the decree, Johnson told Zelenskiy the move made the Minsk process – a set of agreements designed to end a separatist war by Russian speakers in eastern Ukraine – unworkable, a message echoed by foreign minister Liz Truss, who said Russia had broken international law.

“We will not allow Russia’s violation of its international commitments to go unpunished,” Truss said.

Britain has prepared sanctions against Russia, and Tuesday’s sanctions may not be the full extent of the response, with further sanctions in reserve if Putin subsequently decides to invade.

By Jonathan Allen ST. PAUL, Minn. (Reuters) -Pinning George Floyd face down on a Minneapolis road in a May 2020 arrest seemed reasonable in the moment, one of three former…