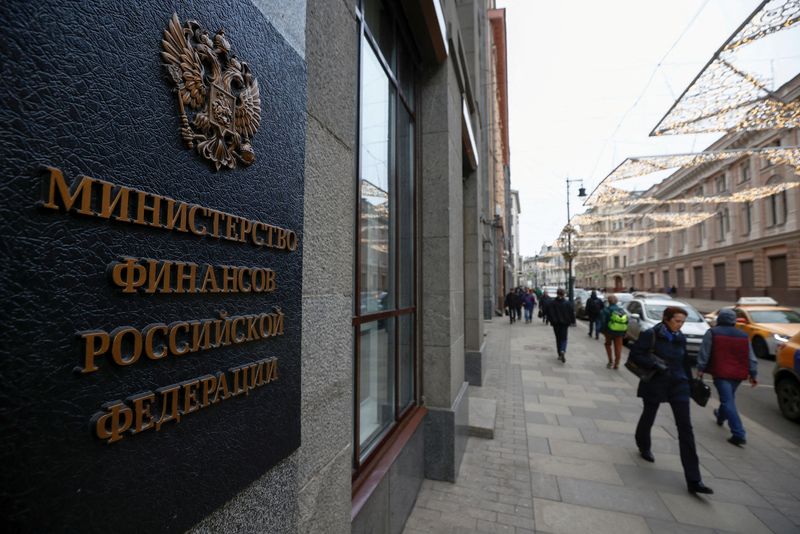 By Marc Jones and Andrea Shalal

LONDON/WASHINGTON (Reuters) – Russia made what appeared to be a late U-turn to avoid a default on Friday, as it made a number of overdue interest payments in dollars on its overseas bonds, despite previously vowing to pay only in roubles as long as its reserves remained frozen.

Russia’s $40 billion of international bonds have become the focus of a game of financial chicken amid sweeping Western sanctions – and speculation about a default is likely to revive in less than four weeks, when a U.S. license allowing Moscow to make payments is due to expire.

Russia’s finance ministry said it had managed to pay $564.8 million in interest on a 2022 Eurobond and $84.4 million on another 2042 bond in dollars – the currency specified on the bonds.

A senior U.S. official confirmed Moscow had made the payment without using reserves frozen in the United States, adding that the exact origin of the funds was unclear.

Deputy U.S. Treasury Secretary Wally Adeyemo told Reuters that the payments siphoned funds away from Russia’s Ukraine war effort and were a “sign of success” for U.S sanctions policy.

He declined to comment on the future of a Treasury general license due to expire on May 25 that allows banks to process Russian debt payments.

“Our overarching goal is to try to starve Russia of the resources that they’re using to both prop up their economy and finance their war effort, and to stop their invasion of Ukraine. So we’re going to keep making policy decisions with that in mind,” Adeyemo said.

Russia said it had channelled the required funds to the London branch of Citibank, one of the “paying agents” whose job it is to disburse them to the bondholders.

“The payments were made in the currency of issue of the corresponding Eurobonds – in U.S. dollars,” the Russian Finance Ministry said. “Thus, the obligations to service sovereign Eurobonds are fulfilled.”

Two holders of the bonds said they had not yet received the funds, but the process can take days.

“I don’t see a reason why they (the paying agent) cannot make that payment,” said Kaan Nazli, portfolio manager for the Emerging Markets Debt team at Neuberger Berman, which holds Russian sovereign bonds.

Russia’s Sberbank separately said it had paid coupons on two subordinated eurobond issues in roubles because sanctions by the United States and Britain prevented it from making payments to investors in line with its initial commitments.

Russia has not had a default of any kind since a financial crash in 1998 and has not seen a major international or ‘external’ market default since the aftermath of the 1917 Bolshevik revolution.

The risk of another one is growing, however, as Western countries have blanketed Russia with sanctions in response to its invasion of Ukraine, which Moscow has termed a “special military operation” to disarm Ukraine and root out what it calls dangerous nationalists.

The interest payments were supposed to be paid earlier this month but a 30-day ‘grace period’ that government bonds often have in their terms meant Moscow’s final deadline was May 4.

Brokers said the announcement sent Russian government bond prices up as much as 15 cents, almost doubling their dollar value in some cases. Those belonging to major still-unsanctioned companies such as Gazprom (MCX:), Lukoil and telecoms firm VimpelCom (NASDAQ:) were quoted up 2-5 cents too.

BlueBay’s Tim Ash called Russia’s move “pretty extraordinary”, pointing out too that the key group of international banks and funds that judge whether a default has happened had recently ruled that it had.

The prospect of a default by Russia was almost unthinkable before its invasion of Ukraine. The billions of dollars it earns from selling oil and gas around the world meant it had one of the world’s lowest government debt levels and an enormous stockpile of currency reserves.

However, Western sanctions have frozen a large chunk of those reserves, and mean banks have needed special dispensations to make any Russian-related payments.

Andy Sparks, managing director at index provider MSCI, said the prospect of a default still loomed large if the U.S. Treasury allows the Russian debt payment license to expire on May 25.

Russia has another bond payment just two days after that which means that, if the U.S. waiver is not extended, it will be almost impossible for Moscow to avoid a default.

“The real question is whether this is just delaying the inevitable,” Sparks said.

“Most investors will take that date of May 25 very seriously and many will not expect that exception to be extended.”