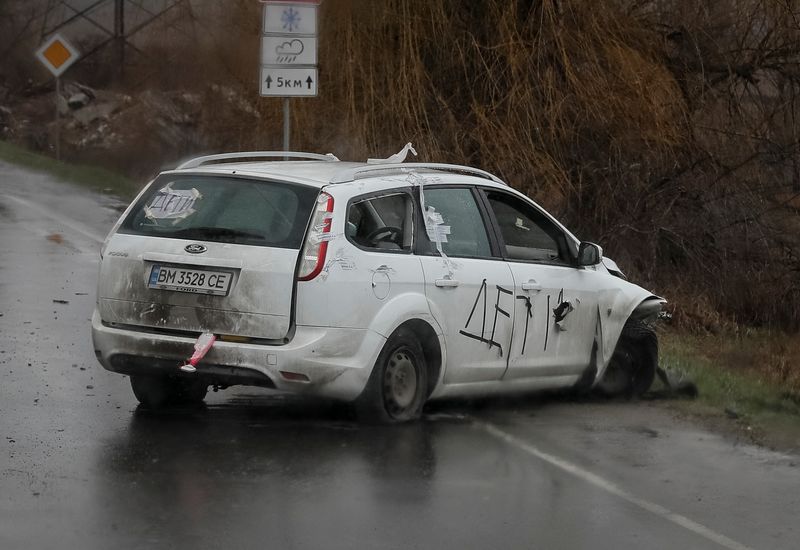 © Reuters. A shot car with inscriptions “Children” is seen on the street, amid Russian invasion on Ukraine, in Bucha, Kyiv region, Ukraine April 3, 2022. REUTERS/Gleb Garanich

(Reuters) – Russia on Sunday denied Ukrainian allegations that it had killed civilians in the Ukrainian town of Bucha, describing footage and photographs of dead bodies as a “provocation” and a “staged performance” by Kyiv.

Ukraine has accused the Russian military of massacring residents of Bucha, a town northwest of the capital Kyiv, an area Ukrainian troops said they recaptured on Saturday.

“All the photos and videos published by the Kyiv regime, allegedly testifying to the ‘crimes’ of Russian servicemen in the city of Bucha, Kyiv region, are another provocation,” Russia’s defence ministry said in a statement.

It called the footage “another staged performance by the Kyiv regime for the Western media.”

Images of dead civilians strewn across the town prompted Western countries to call for those responsible for war crimes in Ukraine to be punished.

The Russian defence ministry said that all Russian military units had left Bucha on March 30, and that civilians had been free to move around the town or evacuate while it was under Russian control.

“During the time that Russian armed forces were in control of this settlement, not a single local resident suffered from any violent actions,” it said.

Moscow has previously denied allegations that it has targeted civilians, and has rejected accusations of war crimes.

Russia sent tens of thousands of troops into Ukraine on Feb. 24 in what it called a special operation to degrade its southern neighbour’s military capabilities and root out people it called dangerous nationalists.

Ukrainian forces have mounted stiff resistance and the West has imposed sweeping sanctions on Russia in an effort to force it to withdraw its forces.