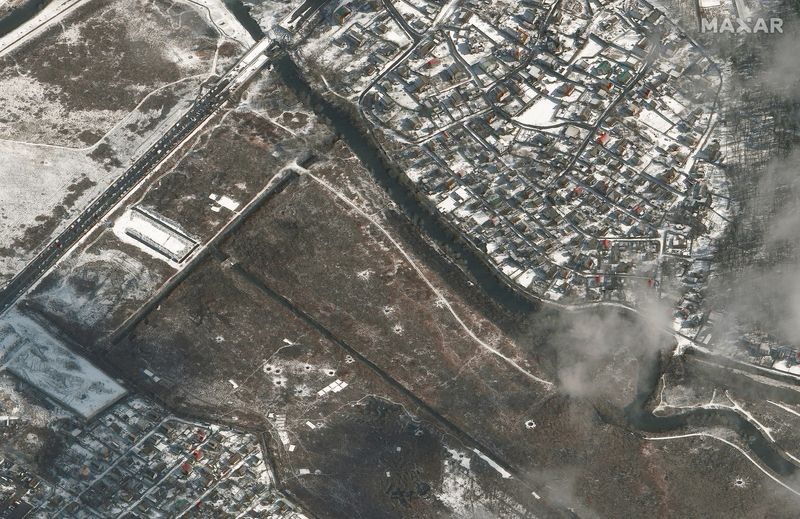 © Reuters. A satellite image shows a damaged bridge and craters in a field, amid Russia’s ongoing invasion of Ukraine, in Irpin, Ukraine, March 8, 2022. Satellite image ©2022 Maxar Technologies/Handout via REUTERS

By Natalia Zinets and Pavel Polityuk

LVIV, Ukraine (Reuters) – Russia announced a new ceasefire in Ukraine on Wednesday to let civilians flee besieged cities, after days of mostly failed promises that have left hundreds of thousands trapped without access to medicine or fresh water.

Wednesday’s announcement of “silence” was similar to one on Tuesday that promised safe passage from the cities of Kyiv, Kharkiv, Chernihiv, Sumy and Mariupol. So far, only one corridor has been opened, out of Sumy on Tuesday.

Ukraine said it too had agreed to halt fire between 9:00 a.m. and 9:00 p.m. (0700-1900 GMT) to let civilians escape besieged cities through six corridors. In a televised statement, Deputy Prime Minister Iryna Vereshchuk called on Moscow to observe local ceasefires.

The greatest alarm has been sounded over Mariupol, a southern port totally surrounded by Russian troops for more than a week, where the Red Cross has described the situation faced by civilians as “apocalyptic”.

Residents there have been sheltering underground from relentless bombardment, unable to evacuate their wounded, and with no access to food, water, power or heat.

A series of local ceasefires to let them leave have failed since Saturday. Kyiv said 30 buses and eight trucks of supplies failed to reach it on Tuesday after they came under Russian shelling in violation of the ceasefire. Moscow has blamed Kyiv for failing to halt fire.

In Ukraine’s two biggest cities, Kyiv and Kharkiv, Russia’s safe passage offer would force civilians to go to Russia itself or its ally Belarus, proposals rejected by Kyiv.

More than 2 million people have fled Ukraine since President Vladimir Putin launched the invasion nearly two weeks ago. Moscow calls its action a “special military operation” to disarm its neighbour and dislodge leaders it calls “neo-Nazis.” Kyiv and its Western allies dismiss that as a baseless pretext for an unprovoked war against a democratic country of 44 million people.

The war has swiftly cast Russia into economic isolation never before visited on such a large economy. The United States said on Wednesday it was banning imports of Russian oil, a major change in policy after energy was previously exempted from sanctions.

Western companies have mostly withdrawn from the Russian market. In a stark symbol, McDonalds said on Tuesday it was shutting its nearly 850 restaurants in Russia. Its first, which drew huge queues to Moscow’s Pushkin Square when it opened in 1990, had been an emblem of the end of the Cold War. Starbucks (NASDAQ:) , Coca-Cola (NYSE:), Pepsi and others made similar announcements.

Russia said on Wednesday it was preparing a swift response to sanctions that would hit the West’s most sensitive areas.

Banishing Russia, the world’s top exporter of combined oil and gas, from markets is sending shockwaves through the global economy at a time when supply chains are already stretched and inflation in the developed world is at levels not seen since the 1980s. Retail fuel pump prices have surged to records. [O/R]

Both Ukraine and Russia are also major global exporters of food and metals. Prices of grain and food oils have soared worldwide, punishing poor countries in the Middle East, Africa and Asia. Trade in nickel, critical in electric vehicle production, was called off on Tuesday in London after the price more than doubled.

Ukraine said on Wednesday it was banning exports of rye, barley, buckwheat, millet, sugar, salt, and meat for the rest of the year.

U.S. President Joe Biden acknowledged that Americans’ bills would rise but said it was necessary to restrict Russia’s ability to wage war.

“The American people will deal another powerful blow to Putin’s war machine,” he said.

Britain said it would phase out Russian oil and oil products imports by the end of 2022, while the European Union published plans to cut its reliance on Russian gas by two thirds this year It says it now has enough gas for the rest of the winter.

China, which signed a friendship pact with Russia three weeks before the invasion, has yet to join the West in condemning Moscow or imposing sanctions. Washington has raised the prospect of acting against Chinese firms that sell Russia technology.

Commerce Secretary Gina Raimondo told the New York Times Washington could “essentially shut” down Semiconductor Manufacturing International Corp or any Chinese companies that continued to supply chips or other advanced technology to Russia.

U.S. intelligence chiefs told lawmakers on Tuesday that China appeared to have been unsettled by the difficulties Russia was facing in Ukraine and the strength of the Western reaction.

Western countries believe Moscow had aimed to quickly topple the Kyiv govenrment in a lightning strike two weeks ago, and is now being forced to recalibrate its military campaign after underestimating Ukrainian resistance.

It has taken substantial territory in the south, but has yet to capture any of the major cities in northern or eastern Ukraine, with its main assault force stalled for more than a week on a highway north of Kyiv.

Russia is desperate for some kind of victory in cities like Mariupol and Kyiv, before it negotiates peace, Vadym Denysenko, an adviser to Ukraine’s interior minister, wrote on Facebook (NASDAQ:) on Wednesday. “Therefore, our task is to withstand for the next 7-10 days,” he said.

As Russian forces press their offensive in the south, Ukrainians fear the next big target will be Odessa, Ukraine’s main Black Sea port. Residents are preparing to defend the historic city of 1 million, a polyglot centre of culture with wide resonance for Ukrainians and Russians alike. A giant blue and yellow banner reading “Odessa-Ukraine” was draped atop sandbags in the near-deserted city centre.

“We did not surrender Odessa to Hitler, and we will not surrender it to anyone else,” said Galyna Zitser, director of the Odessa Philharmonic, which on Tuesday put on its first performance since the crisis began.