By Ryan McMorrow in Beijing and Richard Waters in San Francisco On Mar 11, 2022 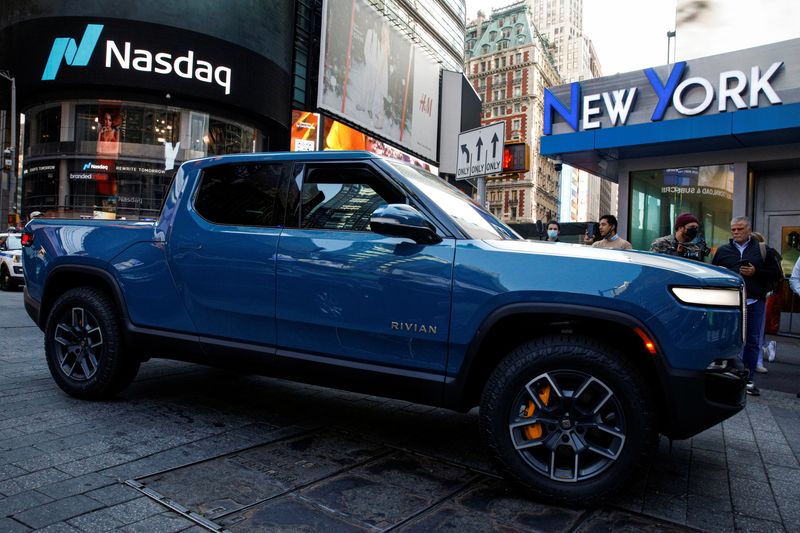 By Akash Sriram and Paul Lienert

(Reuters) – Rivian Automotive Inc warned on Thursday that supply-chain issues could cut its planned production in half in 2022 to 25,000 vehicles, sending shares of the EV maker down more than 12% in extended trading.

Rivian said as of March 8, it had built 1,410 vehicles this year, and 2,425 since the start of production. It said that during the two weeks prior to March 8 it averaged a weekly production rate that was about twice the exit rate of the fourth quarter of 2021, but it expects supply-chain constraints to continue through 2022.

“As we continue to ramp up our manufacturing facility, manage supply chain challenges, face continued inflationary pressures and minimize price increases to customers in the near term, we expect to recognize negative gross margins throughout 2022,” the company said in a letter to shareholders.

“The 2022 production guidance was disappointing and well short of what they said in their road show, and the fourth-quarter loss was wider than expected,” said Garrett Nelson, analyst at CFRA Research.

Rivian, other startups and legacy automakers such as Ford Motor (NYSE:) Co and General Motors Co (NYSE:) face tough competition from market leader Tesla (NASDAQ:) Inc as they aim to start delivering more electric vehicles in the near future.

Chief Executive R.J. Scaringe said in a Thursday conference call with analysts that Rivian expects a “significant” production ramp-up in the second quarter of the EDV-700 van for Amazon.com Inc (NASDAQ:).

Rivian said it was “exploring ways to further expand” its commercial relationship with Amazon, which owns a 20% stake in the startup and has ordered 100,000 vans. Rivian said it will begin producing a second Amazon van this year, the EDV-500, which is shorter and narrower than the EDV-700.

As of Thursday’s market close, Rivian’s share price had dropped about 77% and lost $124.5 billion in market capitalization since hitting its peak after going public in November.

The company ended the quarter with $18.4 billion in cash and equivalents.

Ryan McMorrow in Beijing and Richard Waters in San Francisco