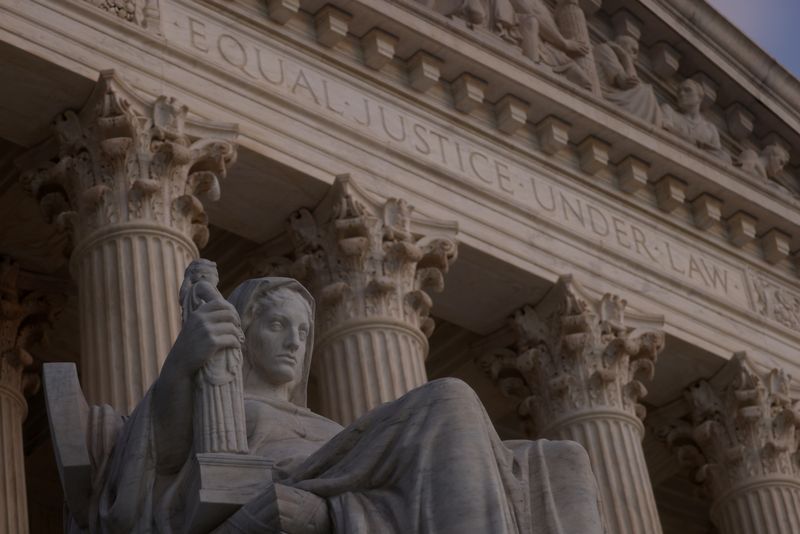 © Reuters. FILE PHOTO: The sun sets at the U.S. Supreme Court building the week that the court is expected to hear arguments in a Mississippi case that challenges Roe v. Wade in Washington, U.S., November 29, 2021. REUTERS/Leah Millis/File Photo

The unprecedented leak stunned Washington. It holds the potential to reshape the political landscape ahead of U.S. midterm elections in November.

Following is some reaction to the report:

“The Republican-appointed Justices’ reported votes to overturn Roe v. Wade would go down as an abomination, one of the worst and most damaging decisions in modern history.

“Several of these conservative Justices, who are in no way accountable to the American people, have lied to the U.S. Senate, ripped up the Constitution and defiled both precedent and the Supreme Court’s reputation – all at the expense of tens of millions of women who could soon be stripped of their bodily autonomy and the constitutional rights they’ve relied on for half a century.”

“Congress must pass legislation that codifies Roe v. Wade as the law of the land in this country NOW. And if there aren’t 60 votes in the Senate to do it, and there are not, we must end the filibuster to pass it with 50 votes.”

“This decision is a direct assault on the dignity, rights, & lives of women, not to mention decades of settled law. It will kill and subjugate women even as a vast majority of Americans think abortion should be legal. What an utter disgrace.” DEMOCRATIC SENATOR ELIZABETH WARREN:

“An extremist Supreme Court is poised to overturn #RoeVWade and impose its far-right, unpopular views on the entire country. It’s time for the millions who support the Constitution and abortion rights to stand up and make their voices heard. We’re not going back — not ever.”

“I hope that SCOTUS returns the question of abortion where it belongs: the States. This is why I led a 24-state coalition in support of MS’s law banning them after 15 wks. I’ll con’t to ensure that TX protects the unborn & pray for the end of abortion across our nation.”

“The Supreme Court & the DOJ must get to the bottom of this leak immediately using every investigative tool necessary. In the meantime, Roe was egregiously wrong from the beginning & I pray the Court follows the Constitution & allows the states to once again protect unborn life.”

“The left continues its assault on the Supreme Court with an unprecedented breach of confidentiality, clearly meant to intimidate. The Justices mustn’t give in to this attempt to corrupt the process. Stay strong.”

“I will say, if this is the Court’s opinion, it’s a heck of an opinion. Voluminously researched, tightly argued, and morally powerful.”

“This is an absolutely disgraceful attack on our fundamental right to choose, and we will fight it with everything we’ve got. Let me be loud and clear: New York will always guarantee your right to abortion. You have our word.”

“The Supreme Court’s confidential deliberation process is sacred & protects it from political interference. This breach shows that radical Democrats are working even harder to intimidate & undermine the Court. It was always their plan. The justices cannot be swayed by this attack.”

“Overturning Roe would be absolutely wrong. Not to mention catastrophic for Ohio, where Republicans have introduced one extreme proposal after another to ban abortion before most women even know they’re pregnant. We must fight back. Ohioans’ most fundamental rights are at stake.”

“This leaked opinion is horrifying and unprecedented, and it confirms our worst fears … While we have seen the writing on the wall for decades, it is no less devastating, and comes just as anti-abortion rights groups unveil their ultimate plan to ban abortion nationwide… (W)e will continue to fight like hell to protect the right to access safe, legal abortion.”

“The language in the draft opinion leaked from the Supreme Court is outrageous, irresponsible and shocking. Any Justice who signs onto this opinion is fueling the harm and violence that will happen to people who become pregnant in this country.”

“If the Supreme Court does indeed issue a majority opinion along the lines of the leaked draft authored by Justice Alito, the shift in the tectonic plates of abortion rights will be as significant as any opinion the Court has ever issued.”

Over 60? Here’s Why You Should Not Take a Daily Aspirin