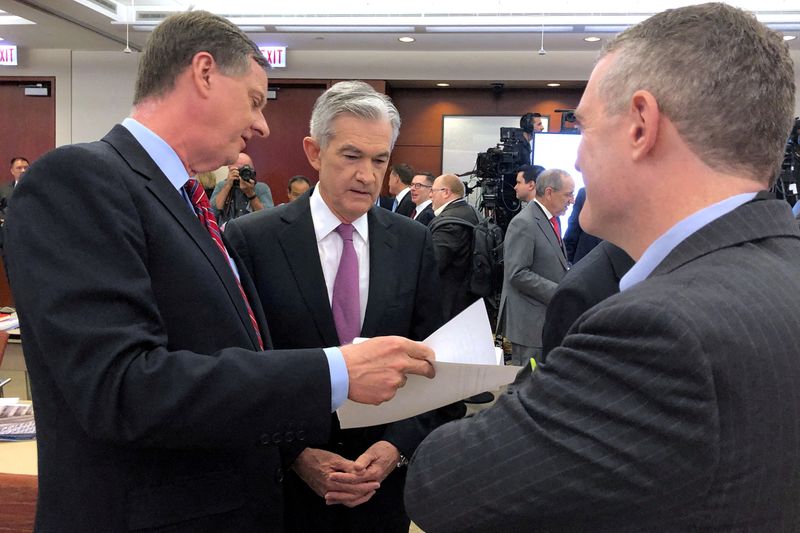 (Reuters) – The Senate’s sign-off last week on Jerome Powell’s second term as head of the Federal Reserve leaves the helm of the U.S. central bank in the hands of a white male, just as it has been for most of its 108-year history.

But later this summer, for the first time, white men will account for fewer than half of the Fed’s policymakers.

By September, eight of the 18 officials who determine monetary policy for the world’s biggest economy will be women and five will be people of color – both records – with more opportunities to diversify further in the months ahead.

Moreover, the more than 100 directors across the Fed’s regional bank system, who regularly provide their views on the economy to the central bank officials responsible for setting interest rates, more closely reflect the diversity of the U.S. population than at any prior time.

No top policymaker is now or has ever been of Latin American heritage, for instance, and newly published data https://www.federalreserve.gov/aboutthefed/economist-and-research-assistant-diversity-data.htm from the Fed shows more than half of the nearly 1,000 PhD economists whose analyses lay the groundwork for policy decisions are white men.

At the Fed bank boards, where Fed policymakers have successfully pushed for better gender and racial diversity, more than 75% of directors work in the banking, financial or business sectors, with labor representation particularly thin, a report https://www.populardemocracy.org/news/publications/uneven-progress-inadequate-representation-2022-analysis-diversity-federal-reserve published on Thursday by the Center for Popular Democracy found.

Some 75% of directors with business backgrounds come from large firms rather than the small companies that make up the majority of U.S. employers, the study showed.

It’s enough to keep the critics on the Fed’s – and Powell’s – heels. Indeed, the Dallas Fed’s decision last week to hire a white woman as its new president rather than a Hispanic led U.S. Senator Bob Menendez, a New Jersey Democrat of Cuban descent, to oppose Powell’s confirmation to a second term.

Without any Latino policymakers at the central bank, “the voices of one-fifth of the citizens of America are repeatedly drowned out when the Fed is making critical decisions on economic policy,” Menendez said in announcing his “no” vote against Powell’s confirmation on Thursday even as a wide majority of other senators backed the Fed chief.

Under Powell, the Fed has only just begun a fight against inflation that is rising faster than in the past four decades.

Policymakers are expected to deliver a series of big interest rate hikes to help cool those price pressures and bring inflation down to the Fed’s 2% target.

Many economists say those rate hikes will lead to job losses as the economy slows, if not an outright recession. Any rise in unemployment historically hits people of color and low-wage or lesser-educated workers hardest.

So Powell has appealed to Americans directly for their understanding, saying that he knows it will be painful but ultimately less so than allowing inflation to continue to build.

Other Fed officials have similarly laid out the case for administering strong medicine now to preserve the long-run health of the labor market.

“Having a leadership group that looks more like America than it ever has will help the Fed remain credible in the eyes of the public,” says Kaleb Nygaard, a senior research associate at the Yale Program on Financial Stability. “And having public confidence is one of the most important tools a central bank has.”

OPPORTUNITIES TO DO MORE

But the Fed still has plenty of distance to go on the diversity road.

Some 55% of the 945 PhD economists employed at the Fed are white males, according to data recently published by the central bank. One-quarter are women, a majority of whom are white. In all, the Fed employs 159 economists who identify as Asian and 89 as Hispanic or Latino. Just 14 are Black while seven identify as being of two or more races.

The central bank has had much more success diversifying the boards of its 12 regional Fed banks, a change driven by the Fed’s Board of Governors, which directly picks or has at least some say over the choice of two-thirds of the directors.

These directors, in turn, pick new presidents at the regional Fed banks. And their influence may already be having an effect.

The Boston and Dallas Fed banks, both previously led by white men who left last fall amid an ethics scandal, have hired women as their replacements.

The Boston Fed’s pick, University of Michigan provost Susan Collins, will be the first Black woman to run a regional Fed bank. The Dallas Fed board last week appointed Lorie Logan, a markets expert currently at the New York Fed, as its next chief. Logan is white.

Two more Fed banks, in Kansas City and Chicago, will also soon replace their current presidents, a white woman and white man, respectively, both of whom reach mandatory retirement age next January.

At the Fed’s Board of Governors, whose seven members are picked by the White House, there is also change.

Last week the Senate confirmed Michigan State University’s Lisa Cook and Davidson College’s Philip Jefferson, both Black economists nominated by U.S. President Joe Biden, as Fed governors. The Fed has only had three other Black governors, with the most recent one being in 2006.

“Diversity of their leadership matters, not as a gesture, not as symbolism, but as a statement of how the Fed genuinely sees themselves as … in touch with the economic interests of the country,” said Benjamin Dulchin of the Center for Popular Democracy.

Renault sells stake in Russia’s Avtovaz, with buyback option By Reuters – May 16, 2022

(Reuters) -Renault will sell its majority stake in carmaker Avtovaz to a Russian science institute, the French carmaker said on Monday, adding that the deal included a six-year…

Gold prices buckle under pressure from ‘King Dollar’, higher yields By Reuters – May 16, 2022

By Swati Verma (Reuters) – Gold prices fell more than 1% to their lowest in 3-1/2 months on Monday as elevated bond yields and a firmer U.S. dollar dampened bullion demand, even…

HONG KONG (Reuters) – Cryptocurrencies resumed their slide on Monday, giving up the gains they had eked out over the weekend, as regulators continued to circle. European officials…