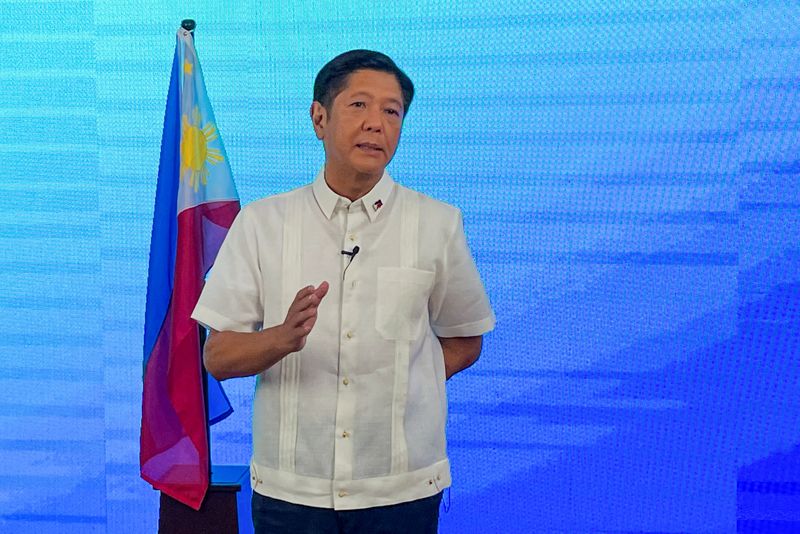 © Reuters. FILE PHOTO: Ferdinand Marcos Jr speaks to foreign correspondents, including Reuters, two days after clinching a landslide victory in the Philippines presidential election, based on an unofficial tally of votes, at his headquarters in Mandaluyong City, Phi

MANILA (Reuters) – Philippines president-elect Ferdinand Marcos Jr is all but certain to command a supermajority in Congress, a proclamation of winners showed on Wednesday, boosting chances of advancing his legislative agenda when he takes power next month.

All but two of the 12 candidates declared winners of Senate seats by the election commission were allied with Marcos’s “Uniteam” political juggernaut, adding to a new lower house revealed last week that was dominated by parties that sided with the presumptive president.

Marcos, the son and namesake of the disgraced dictator driven from power in a 1986 uprising, has yet to reveal a policy agenda, but many analysts expect him to continue from where outgoing leader Rodrigo Duterte left off.

“It will be easy for the incoming administration, given the support they have from the local government and political families, to get their way in terms of legislative agenda,” said Ranjit Rye, a political science professor at the University of the Philippines.

Marcos, 64, who won last week’s election in a landslide, inherits an economy on a stronger footing but will need to raise revenue for infrastructure and addressing big debts from Duterte’s pandemic borrowing.

A legislative majority was expected and Marcos’s opponents have expressed fear he will use it push through constitutional changes to entrench his family’s rule for decades to come.

The new senators join 12 incumbents who were elected in mid-term polls in 2019, most of those Duterte supporters.

Widely expected to become Senate president is Cynthia Villar, wife of a billionaire, whose son also won a Senate seat having campaigned under Marcos’s “Uniteam”.

Marcos’s cousin, Ferdinand Martin Romualdez, is likely to become lower house speaker, according to political analysts, having received pledges of support from the overwhelming majority of the 300 newly lower house lawmakers, among them Marcos’s eldest son.

Cristina Palabay, secretary general of rights group, Karapatan, said the backing Marcos will have does not bode well for checks and balances.

“It is worrisome that Marcos and Duterte allies will have supermajority,” Palabay said.

“His priorities and agenda can be anything that is consistent with his father’s policies and politics, and to Duterte’s.”