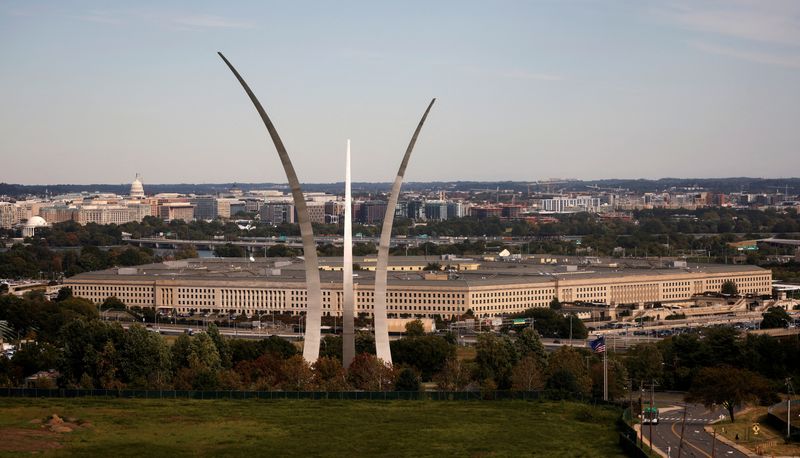 By Phil Stewart and Idrees Ali

WASHINGTON (Reuters) – The Pentagon stopped short on Monday of creating a list of extremist groups that military members cannot join and declined to say explicitly whether refusing to view President Joe Biden as America’s legitimate leader was a violation of policy.

The U.S. military, like American society, is under political strain after years of divisive politics. A small minority of military servicemembers have refused orders to get vaccinated, after that issue became politicized, and some participated in the deadly Jan. 6 riot at the U.S. Capitol by supporters of then-President Donald Trump.

Following the riot, the Biden administration, which took office on Jan. 20, spent much of the year working to clarify its definition of extremism and what kinds of military participation in extremist activity to explicitly prohibit, unveiling the results on Monday.

The new definition includes everything from prohibiting “liking” extremist content on social media to fundraising or demonstrating for an extremist organization. Punishment, if there is any, could be up to local commanders.

Still, the Pentagon stopped short of prohibiting membership in any group, from the Proud Boys to the Oath Keepers and the Ku Klux Klan, and avoided weighing in on specific scenarios, like a soldier’s view of the legitimacy of Biden as president.

Trump has repeatedly falsely claimed that his 2020 election loss to the Democrat resulted from widespread voter fraud.

“If we got into coming up with a list of extremist groups, it would be only probably as good as the day we published it because these groups change,” Pentagon spokesman John Kirby (NYSE:) said at a news briefing.

U.S. defense officials said, however, that the restrictions announced on Monday meant that meaningful, active participation in any such group would be impossible.

Adam Smith, the top Democrat on the military oversight committee in the House of Representatives, praised the updated policy.

“Protecting our service members from the threat of violent extremism is far too important for partisan misinformation,” he said in a tweet.

The Inspector General faulted the Defense Department for failing to consistently track the data in a uniform way.

“Until the DoD establishes DoD-wide policy for tracking and reporting allegations of prohibited activities, the DoD will continue to have inconsistent tracking … and difficulty validating the accuracy of the data,” it said.

The Pentagon, in its report on extremism, said that available data generally shows that cases of prohibited extremist activity among servicemembers were rare. Kirby said officials had found about 100 cases in total, but acknowledged the Pentagon needed to do a better job collecting data.

U.S. defense officials, explaining the new policy, said it would tap into existing tools that identify terrorist threats and spies in the ranks to better weed out extremist activity.

But the goals and timeline for enforcement of the new policy were unclear, including when U.S. troops might start getting punished for inappropriate use of social media.

Officials said they did not plan to regularly monitor Twitter (NYSE:), Facebook (NASDAQ:) and other social media sites, raising questions about whether the new policy was a substantial departure from existing screening of U.S. servicemembers at key moments in their careers, including recruitment.

Kirby stressed that the goal of the policy was not to prohibit political activity by U.S. servicemembers – something that would be difficult to do when members of the Reserve forces, for example, include government officials.

“This isn’t about political leanings or partisan inclinations,” Kirby said, adding it was about “activity.”

What Is Fiat Currency? A Definition + How It Differs From Cryptocurrency