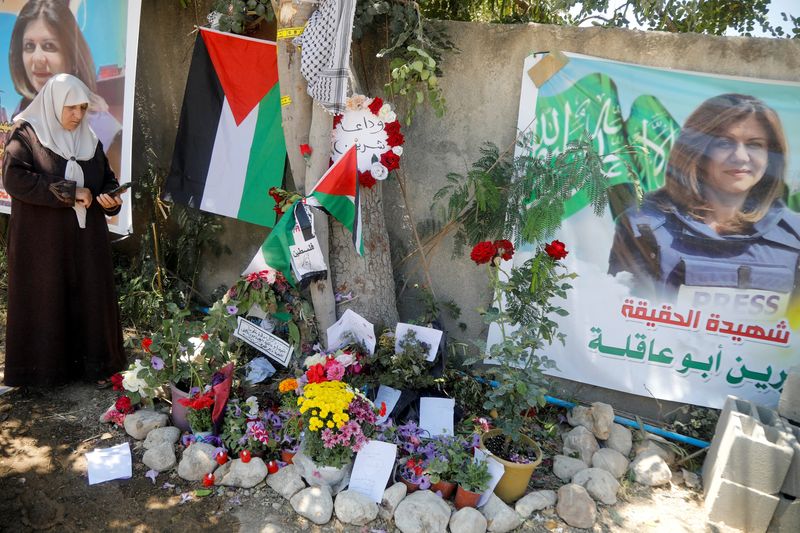 © Reuters. FILE PHOTO: A Palestinian woman takes pictures at the scene where Al Jazeera reporter Shireen Abu Akleh was shot dead during an Israeli raid, in Jenin, in the Israeli-occupied West Bank, May 17, 2022. Picture taken May 17, 2022. REUTERS/Raneen Sawafta

Abu Akleh was killed on May 11 while covering an Israeli military raid in the Palestinian city of Jenin in the occupied West Bank. Her death sparked Palestinian outrage and international condemnation.

“The relevant parties in the state of Palestine agreed to allow the U.S. side to conduct ballistic works on the bullet. It was handed over to them,” Akram al-Khatib, General Prosecutor for the Palestinian Authority, said in a statement published by the official Palestinian news agency WAFA.

There was no immediate comment from U.S. diplomatic officials in Jerusalem.

The Israeli military, prime minister’s office and defence ministry did not immediately comment when asked whether Israel would be cooperating with the U.S. investigation and, if so, how.

Defence Minister Benny Gantz said in May that Israel was “prepared to conduct an investigation in collaboration with international actors”.

After its own investigation, the Palestinian Authority said Abu Akleh had been shot by an Israeli soldier in a “deliberate murder”.

Israel has denied the accusation and says it is continuing its own investigation.

But it says it cannot determine whether she was shot accidentally by an Israeli soldier or by a Palestinian militant during an exchange of fire without examining the bullet to see if it matches an Israeli military rifle.

U.S. President Joe Biden is expected to meet separately with Palestinian and Israeli leaders during a visit to the region on July 13-16.

Video footage showed that Abu Akleh, 51, was wearing a blue vest clearly marked “Press” when she was shot. At least two colleagues who were with her said they had come under Israeli sniper fire without being near any militants.

This Type of Debt No Longer Can Harm Your Credit Score