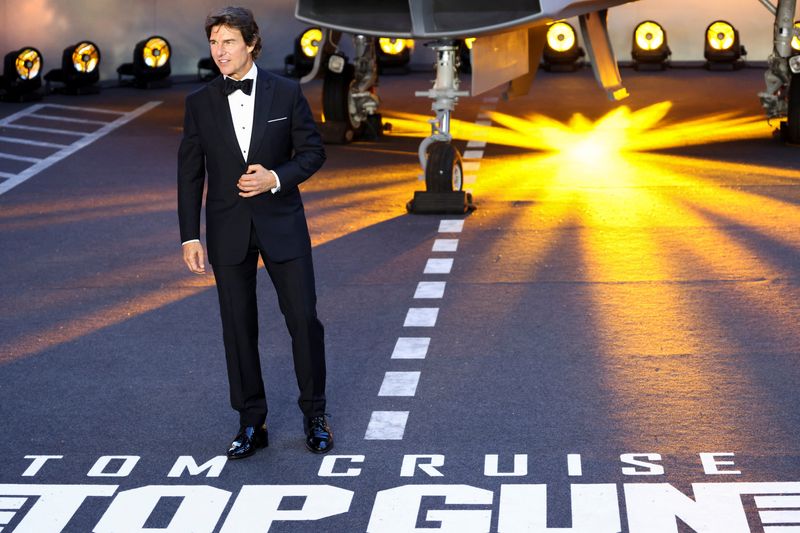 (Reuters) – U.S. cinema stocks took off on Friday amid soaring expectations for the Memorial Day weekend debut of the sequel to the Tom Cruise blockbuster, “Top Gun”.

Cinemark Holdings (NYSE:), AMC Entertainment (NYSE:) Holdings and Imax Corp each rallied more than 6% as “Top Gun: Maverick” debuted in cinemas, with box office analysts projecting the Paramount film will be one of the biggest box office hits of the summer.

The movie had been scheduled for release in 2020, but was delayed multiple times during the COVID-19 pandemic.

The Rotten Tomatoes movie review website showed the sequel to the 1986 blockbuster with a 97% rating from established film critics and a 99% rating from audience reviewers.

In the movie, 59-year-old Cruise reprises his role as a cocky Navy pilot, whose call sign is Maverick, with a penchant for bucking authority.

Users on Stocktwits, popular with retail investors, posted memes about the movie, as well as links to reviews and other messages speculating that it would lift related cinema stocks.

Shawn Robbins, chief analyst at BoxOffice Pro, recently estimated that ticket sales would hit $100 million over the Memorial Day weekend in the United States and Canada. That would make it the highest-grossing debut of Cruise’s career.

Shares of AMC soared in 2021 as part of a trading frenzy around several so-called meme stocks. So far in 2022, AMC’s stock has tumbled 51%, while Cinemark has gained 6%.