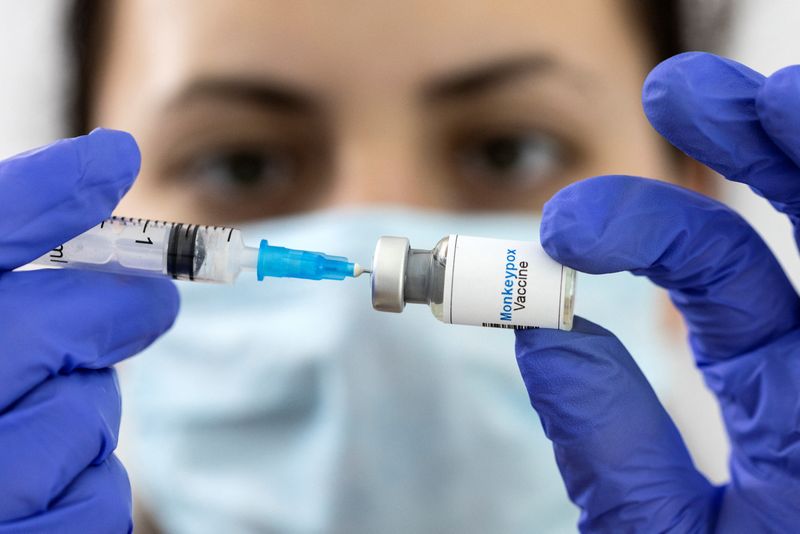 By Mrinalika Roy and Emma Farge

GENEVA (Reuters) -Countries should take quick steps to contain the spread of monkeypox and share data about their vaccine stockpiles, a senior World Health Organization official said on Friday.

“We think that if we put in place the right measures now we probably can contain this easily,” Sylvie Briand, WHO director for Global Infectious Hazard Preparedness, told the U.N. agency’s annual assembly.

Monkeypox is a usually mild viral infection that is endemic in parts of west and central Africa.

It spreads chiefly through close contact and until the recent outbreak, was rarely seen in other parts of the world, which is why the recent emergence of cases in Europe, the United States and other areas has raised alarms.

So far, there are about 300 confirmed or suspected cases in around 20 countries where the virus was not previously circulating.

“For us, we think that the key priority currently is trying to contain this transmission in non-endemic countries,” Briand told a technical briefing for member states.

Needed measures included the early detection and isolation of cases and contact tracing, she added.

Member states should also share information about first generation stockpiles of smallpox vaccines which can also be effective against monkeypox, Briand said.

“We don’t know exactly the number of doses available in the world and so that’s why we encourage countries to come to WHO and tell us what are their stockpiles,” she said. A slide of her presentation described global supplies as “very constrained”.

Currently, WHO officials are advising against mass vaccination, instead suggesting targeted vaccination where available for close contacts of people infected.

“Case investigation, contact tracing, isolation at home will be your best bets,” said Rosamund Lewis, WHO head of the smallpox secretariat which is part of the WHO Emergencies Programme.