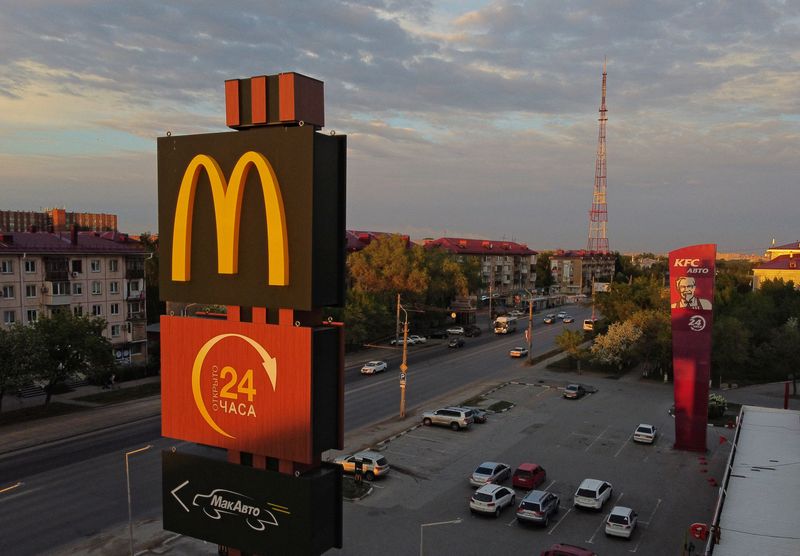 © Reuters. A sign with the logo is on display outside a McDonald’s restaurant in Omsk, Russia May 18, 2022. Picture taken with a drone. REUTERS/Alexey Malgavko

(Reuters) -McDonald’s Corp will sell its Russian business to its current licensee Alexander Govor and the restaurants would operate under a new brand, the world’s largest burger chain said on Thursday.

Govor, who operates the franchise operations through his firm GiD LLC, has been a McDonald’s (NYSE:) franchisee since 2015 and had helped the burger chain expand into remote Siberia, where he runs 25 restaurants.

McDonald’s has operated in Russia for more than 30 years and owns about 84% of its nearly 850 restaurants in the country. Earlier this week, it became one of the biggest global brands to exit the country, while saying it would retain its trademark.

The company did not disclose the financial terms of the transaction, which is expected to close in the coming weeks. The deal provides for employees to be retained for at least two years on equivalent terms and Govor would pay the salaries of corporate employees in 45 regions of the country until closing.

McDonald’s had in March decided to close its restaurants in the country, including the iconic Pushkin Square location in central Moscow – a symbol of flourishing American capitalism in the dying embers of the Soviet Union.

The company last year generated about 9%, or $2 billion, of its revenue from Russia and Ukraine.

Several other Western brands, including Imperial Brands (OTC:) and Shell (LON:), have also agreed to sell their Russian assets or hand them over to local managers.

Grab says worst of pandemic over, forecasts rebound in business

How to Build a Capsule Wardrobe