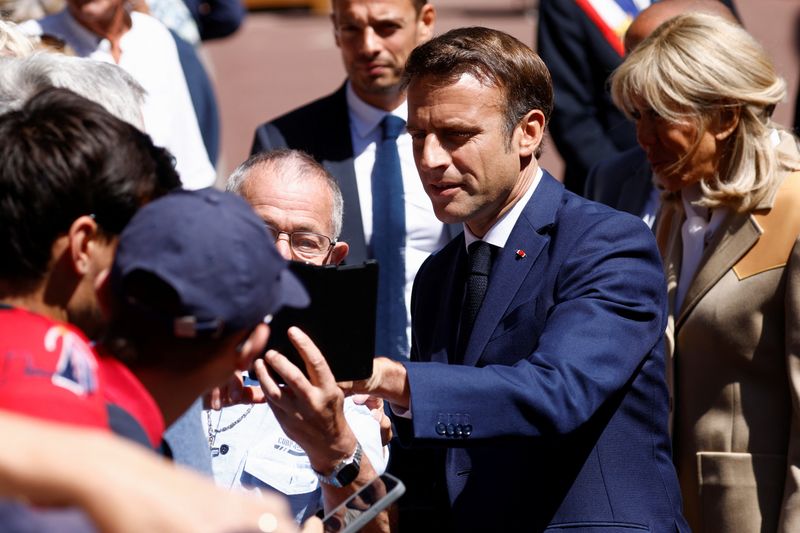 © Reuters. French President Emmanuel Macron and his wife Brigitte Macron greet people as they arrive to vote in the first round of French parliamentary elections, at a polling station in Le Touquet-Paris-Plage, France, June 12, 2022. REUTERS/Yves Herman

By Michel Rose and Tassilo Hummel

PARIS (Reuters) -President Emmanuel Macron faces a tough fight to win an absolute majority in parliament that would allow him to govern with a free hand after a strong showing by a new left-wing alliance in Sunday’s first-round election.

Initial estimates by Elabe put the hard-left veteran Jean-Luc Melenchon’s NUPES bloc neck-and-neck with Macron’s Ensemble! alliance in the first round, with 26.20% and 25.8% respectively.

Elabe projected Ensemble would go to win between 260-300 parliament seats – with the mark for an outright majority set at 289 seats – on June 19 and forecast the left would secure 170-220 seats, a big increase from 2017.

With rampant inflation driving up the costs of living and eroding wages, Macron has struggled to build on his re-election in April, with Melenchon casting him as a free-marketeer more intent on protecting the wealthy than hard-up families.

“In view of this result, and the extraordinary opportunity it offers us and the destiny of the common homeland, I call on people next Sunday to defeat the disastrous politics of the majority, of Macron,” Melenchon said after the vote.

With the two-round system, which is applied to 577 constituencies across the country, the popular vote in the first round is a poor indicator of who will eventually win a majority the following week.

At stake is Macron’s ability to pass his reform agenda, including a contested pension reform that would see the French work longer, which he says is necessary to ensure long-term order to the public finances.

His opponents on the left are pushing to cut the pension age and launch a big spending drive. Melenchon’s bloc has capitalised on anger over surging living costs and Macron’s perceived weakness at connecting with ordinary people.

A record number of voters abstained, pollsters projected, with more than half of all registered voters staying away from polling stations on a hot, sunny Sunday.

Polls forecast that NUPES may deny Macron an absolute majority in the June 19 second round, which would force the president into having to make unruly bill-by-bill pacts with right-wing parties and could trigger a cabinet reshuffle.

No poll has shown NUPES winning a ruling majority — a scenario that would thrust France into an unstable period of cohabitation where the president and prime minister come from different political groupings.

NUPES’ manifesto includes pledges to cap the prices of dozens of goods to tame inflation, hiking the minimum wage, reducing the retirement age and a greater distribution of wealth.

Its frontman, Melenchon, is a euro-sceptic veteran of the hard left, a longtime admirer of the late Cuban revolutionary leader Fidel Castro and Venezuela’s former president Hugo Chavez. He wants France to leave NATO and has previously advanced a Russophile stance.

“National sovereignty is not breaking with Europe, a fascination with authoritarian regimes and alignment with Russia, but a strong nation within a more independent Europe,” Prime Minister Elisabeth Borne said after Sunday’s voting.

Some 14 of Macron’s ministers are competing in local races and could lose their jobs if they fail to win a seat.

One cabinet member most at risk is Europe Minister Clement Beaune, who is campaigning in an eastern Paris constituency. As a former adviser on matters such as Brexit, Beaune, 40, is a close ally of the president.

“That would be a painful loss,” a government source said.

On the other side of the political spectrum, far-right leader Marine Le Pen won over 55% of the votes in her constituency, but will have to face a runoff because of rules on minimum turnout.

By Richard Cowan WASHINGTON (Reuters) -In a potential breakthrough toward the first significant new U.S. gun law in decades, a bipartisan group of senators on Sunday announced an…

By Lisa Richwine (Reuters) – “A Strange Loop,” the story of a Black gay man and his mental struggles as a playwright, won the Tony award for best new musical on Sunday as Broadway…

Biden to travel to Saudi Arabia, Israel next month -source By Reuters – Jun 12, 2022

WASHINGTON (Reuters) -U.S. President Joe Biden will travel to Saudi Arabia and Israel next month and the White House is planning to announce the trip this week, a source familiar…