Libyan protest movement says it will step up its campaign 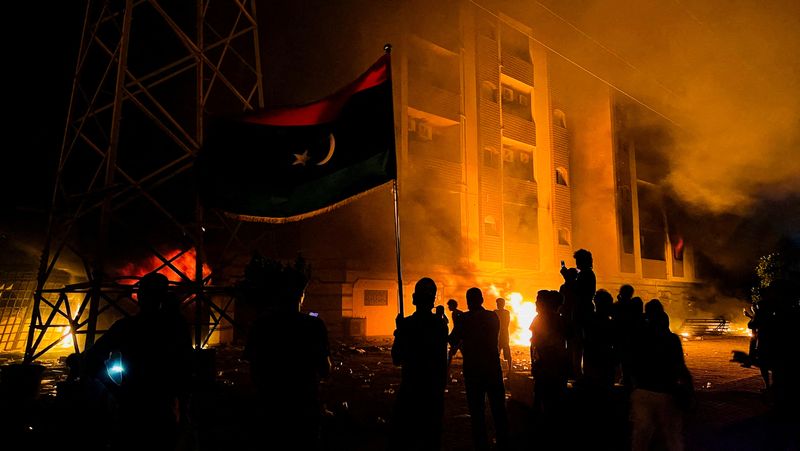 © Reuters. Protesters set fire to the Libyan parliament building after protests against the failure of the government in Tobruk, Libya July 1, 2022. REUTERS/Stringer

TRIPOLI (Reuters) -Libyan protesters will keep demonstrating until all the ruling elites quit power, they said on Saturday, after rallies in most main cities on Friday culminated in a crowd storming the parliament building and torching parts of it.

The protest movement said it would step up its campaign from Sunday, urging demonstrators to set up tents in city squares and practise civil disobedience until they achieve their goal of ousting political institutions and holding new elections.

Security vehicles surrounded government buildings in the capital after sunset on Saturday and there was no sign of new protests after Friday’s rallies demanding change.

Protesters had held their biggest rally in Tripoli for years, chanting slogans against the feuding political elites, as demonstrators blocked off roads in Benghazi and Misrata and set fire to government buildings in Sebha and Qarabuli.

“We affirm our determination to continue the path of peaceful demonstration until the last breath to achieve our goals,” the Beltrees youth movement, which is mostly focused on online activism over living conditions and was behind calls for protests in 2020, said via social media.

It said it would occupy city streets and squares until all the ruling political bodies “announce their resignation in public”.

The fact that protests are happening across the country shows the growing frustration of Libyans on both sides of the main political dividing line between eastern and western factions that were at war for years.

Scheduled national elections collapsed in December, leading rival political factions into a standoff over control of government that has pushed Libya back towards conflict while public services have deteriorated.

After the failed election, the eastern-based House of Representatives parliament said the interim government of Abdulhamid al-Dbeibah in Tripoli was no longer valid and appointed Fathi Bashagha as prime minister.

Dbeibah has refused to cede power, however, and another legislative body, the High State Council (HSC), has rejected the parliament’s moves. The parliament and HSC leaders held talks in Geneva this week but made no breakthrough.

Dbeibah said late on Friday that all Libya’s political institutions should quit and hold elections, something most political leaders have said for years without making the compromises needed for a vote.

Parliament speaker Aguila Saleh condemned “acts of sabotage” in the protesters’ attack on the parliament building in Tobruk, saying it was punishable by law.