Leftists Scholz and Sanchez try to coordinate on budgets, migration 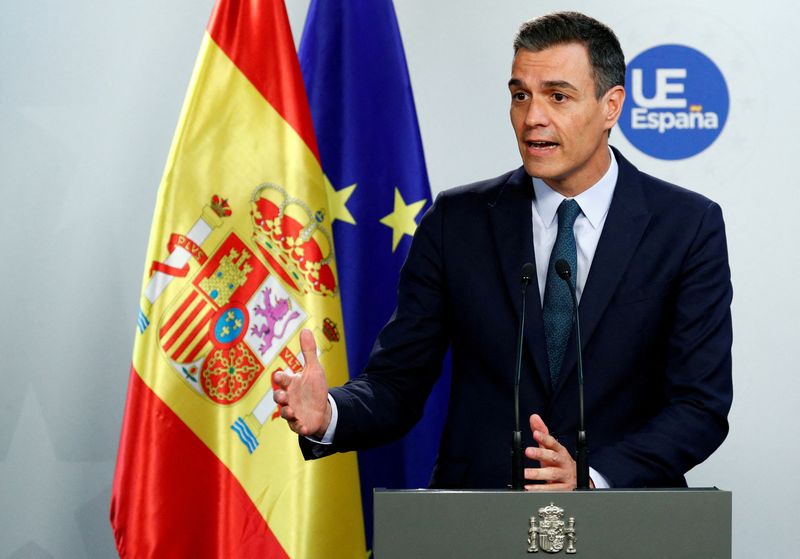 By Andreas Rinke and Belén Carreño

The visit of Scholz, who took over from conservative chancellor Angela Merkel last month, comes with high expectations from Sanchez, with sources saying he sees the trip as a step in rebuilding the Madrid-Berlin axis.

“We got along well with Merkel’s government, but Scholz belongs to our social democratic family. There is more of an ideological fit,” a senior Spanish government official told Reuters.

Achim Post, the general secretary of the European parliament’s Socialist bloc and a prominent member of Scholz’s Social Democrats in Germany, noted that left-wing parties are now leading Spain, Portugal, Germany and the Nordic countries.

He said he hoped Scholz and Sanchez, who are due to hold a news conference at 1500 GMT, would seize the opportunity by pushing policies such as the more equal distribution of refugees among European Union countries.

“The fact that the governments in Spain and Germany are now both led by Social Democrats opens up new scope for jointly strengthening cohesion and progress in Europe,” Post told Reuters.

Spain’s Socialists, the PSOE, followed Scholz’s negotiations in November to form a coalition government with trepidation, fearing too many concessions to the liberals.

“The positions of Scholz and Sanchez will not be exactly the same, but neither will they be contradictory,” he said.

FRUGALS VS SPENDTHRIFTS NO MORE?

During the 2010 debt crisis, Germany was seen in Spain as a leading member of the northern European “frugals” that imposed financial restrictions and looked down on “spendthrift” southern neighbours.

The Sanchez government sees Scholz’s visit as a start in breaking up those two blocs, the Spanish senior government official said.

“We will not abandon our agreements with Paris and Rome, who continue to be key partners,” he said, adding though that a shared ideological stance might enable Spain to bring Germany round to their way of thinking.

European finance ministers will meet today to discuss when to return to the stability pact suspended during the pandemic.

“We need a new credible rule. Most of the big euro countries cannot meet the 60% target,” the Spanish source said.

By Emma Farge GENEVA (Reuters) -The global job market will take longer to recover than previously thought, with unemployment set to remain above pre-COVID-19 levels until at least…

By Gayatri Suroyo and Fransiska Nangoy JAKARTA (Reuters) – Indonesia’s trade surplus narrowed more than expected in December to $1.02 billion, the lowest in 20 months, as a surge…

7 Smart Ways to Use Baking Soda Around the House