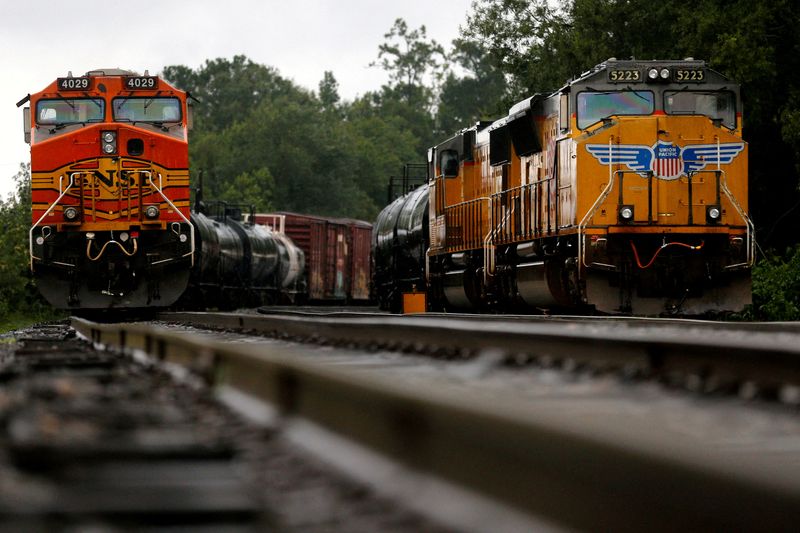 CHICAGO (Reuters) – Rail backlogs in the United States are delaying shipment of grains as well as processed flour and corn syrup, contributing to the national problem of inflation, food and grain companies said at a hearing this week.

Russia’s invasion of Ukraine has increased prices of wheat, corn and vegetable oils after the COVID-19 pandemic disrupted supply chains, and rail delays could further add to costs that are weighing on consumers.

“This is the price of bread going up. This is ethanol not getting mixed with gasoline, and the price at the pump going up,” said Martin J. Oberman, chairman of the Surface Transportation Board (STB), which oversees Class I rail carriers and held the hearing.

Jon Setterdahl, the product and services Leader at Landus Cooperative, said in a letter to the STB that rail transit times from the farmer-owned cooperative have more than doubled.

Landus buys grain from 7,000 farmers across Iowa and described turning away farmer loads of corn and soybeans as country grain storage elevators waited 20 days for rail carriers to pick up loaded grain cars, up from a week and a half.

“This delay in March consisted in a total five trains being delayed into April, which is a total shortage of grain shipments in that month alone of 2.250 million bushels,” said Setterdahl.

U.S. food prices rose 8.8% in March from a year earlier, according to the Bureau of Labor Statistics.

Rail carriers said the delays are due to recent extreme weather and a surge in shipping demand at the end of 2021.

But shippers blame cost-saving measures at the railways before the pandemic, including labor force cuts, storing locomotives to save fuel and stretching train length to as long as 3 miles (4.8 km), which they say have increased congestion, downtime and delays.

BNSF, the largest agricultural rail shipper in the nation, reduced its train, yard and engine workforce by 20% in the year prior to the pandemic, furloughing another fifth of its workers in May 2020, according to the STB.

“When the railroads talk about this being a COVID issue, or related to labor shortages across the economy, that’s their latest excuse,” said Eamon Monahan, vice president of environmental affairs for the Corn Refiners Association. “This is absolutely a years-long issue.”

Cindy Sanborn, chief operating officer of Norfolk Southern Corp which owns Norfolk Southern Railway, said cost-saving innovations implemented in the last decade are needed in order to innovate and remain competitive with trucking and other modes of transportation.

But shippers reject the argument that rail competes with trucking.

“Our members don’t produce truckloads or carloads,” said Monahan. “It is trainloads. Our industry can only operate by rail.”