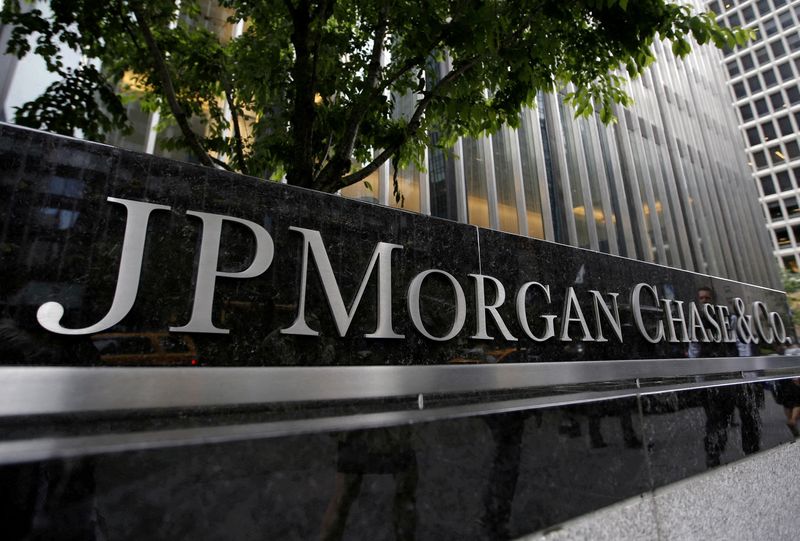 © Reuters. FILE PHOTO: A view of the exterior of the JP Morgan Chase & Co. corporate headquarters in New York City May 20, 2015. REUTERS/Mike Segar/

By Saeed Azhar and David Henry

NEW YORK (Reuters) -Fears that investment banking would take a big hit across Wall Street in the second quarter looked to be confirmed on Thursday, with JPMorgan Chase & Co (NYSE:) and Morgan Stanley (NYSE:) reporting that revenues in that business more than halved.

JPMorgan investment banking revenue was $1.4 billion, down 61% on the year-ago-quarter, largely driven by a 54% drop in fees across all products, while the bank also took markdowns on some loans in its investment banking businesses of approximately $250 million in revenue.

Both lenders attributed the slump to the challenging macroeconomic environment, including soaring volatility sparked by the conflict in Ukraine which left companies skittish about venturing into the market to deals and raise equity and debt.

While that volatility drove up fixed income and equity trading revenues 15% at JPMorgan and 8% at Morgan Stanley as clients rushed to rejig their portfolios, that wasn’t enough to offset the slump in deals after a bumper quarter last year largely driven by loose monetary policy. Aggressive U.S. Federal Reserve interest rate hikes have turned those spigots off.

“Risk taking in investment banking has fallen off a cliff,” Chris O’Keefe, Lead Portfolio Manager at Logan Capital Management, wrote in an email. “It’s no surprise advisory and equity underwriting hit the pause button in front of recession fears. Clients are heeding the old adage, ‘don’t fight the Fed.'”

Citigroup Inc (NYSE:). and Goldman Sachs Group (NYSE:), the two other deals powerhouses, will report on Friday and Monday respectively.

Speaking to analysts, Morgan Stanley and JPMorgan executives said their deal pipelines were solid, but that transactions may not close due to the uncertain economic and market conditions.

“Larger transactional M&A will really be dependent on just price discovery and how markets open up over the course of the next six months,” said Chief Financial Officer Sharon Yeshaya.

Speaking on another call later Thursday morning, Yeshaya said that institutions and corporations were still taking advantage of good days in the market to do deals. “From that perspective, the market is functioning,” she added.

JPMorgan chief executive Jamie Dimon said that the bank had reduced its book of bridge loans, which banks often use to finance client deals, but had taken some losses in the quarter due to deteriorating market conditions.

Dimon said the loss was smaller than it could have been “because we priced ourself out of the market. And that was a good thing because a lot of people can lose a lot of money there, and we lost a little.”

The bridge loan losses plus some smaller equity investment losses knocked 9 cents per share from JPMorgan’s results, according to analyst Jason Goldberg of Barclays (LON:).

Global equity capital market transactions dropped nearly 69% to $263.8 billion in the first half of the year on the same period in 2021, while debt deals slumped by nearly 26%, data from Dealogic showed. Mergers and acquisitions had a mixed first half with the impact of Russia’s invasion felt more severely in the second quarter when the value of announced deals dropped 25.5% year-on-year to $1 trillion, according to Dealogic.

Morgan Stanley CEO James Gorman said the bank’s institutional fixed income and equities team had been “very prudent and appropriately so,” adding that now was not the time to aggressively try to court new business. “We’ll be eyes wide open, but we’re not trying to win the game right now.”

Oppenheimer analysts said the results overall could have been much worse given the market conditions.

“We should be breathing a sigh of relief as these are the kinds of markets in which historically things might go way off the rails for large investment banks,” they wrote on Thursday.