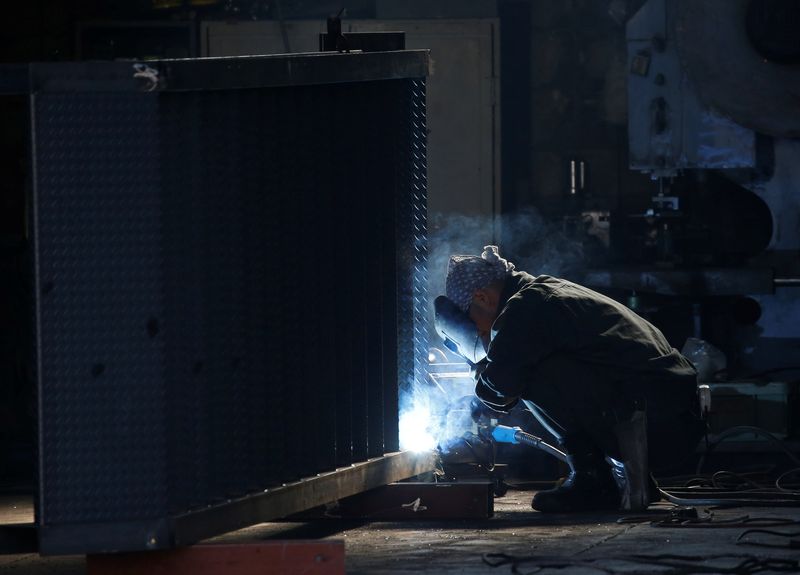 © Reuters. FILE PHOTO: A man works at a factory at the Keihin industrial zone in Kawasaki, Japan February 28, 2017. REUTERS/Issei Kato

TOKYO (Reuters) – Japan’s factory output shrank for the second month in January as the auto sector grappled with production suspensions due to the pandemic, with Russia’s invasion of Ukraine intensifying pressure on an economy facing the risk of a contraction.

Even before the Ukraine crisis erupted, factories in the world’s third-largest economy were struggling with global parts supply disruptions and coronavirus infections of the Omicron variant at home.

“That spilled over (into other industries such as) steel, which also fell.”

Factory output slumped 1.3% in January from the previous month, official data showed on Monday, hurt by falling production of cars as well as declining iron, steel and non-ferrous metals.

That meant output extended declines to a second month, after slipping 1.0% in December, and came in weaker than a 0.7% loss forecast in a Reuters poll of economists.

Japanese car producers including Toyota Motor (NYSE:) Corp and Suzuki Motor Corp have faced output cuts after being hit by supply chain disruptions and seeing pressure from a record surge in COVID-19 infections at home.

Monday’s data showed output of cars and other motor vehicles slumped 17.2% from the previous month in January, falling for the first time in four months and pulling down the headline output figure by nearly 2.7 percentage points.

Complications from the Ukraine crisis posed serious downside risks to Japan’s output and broader economy, Minami added, saying output could be curbed if the conflict triggers a global commodity and energy shortage.

“The longer the war between Ukraine and Russia lasts, the stronger sanctions are likely to become,” he said. “It depends how far things will go.”

Manufacturers surveyed by the Ministry of Economy, Trade and Industry (METI) expected output to advance 5.7% in February and 0.1% in March. A government official said those forecasts were taken as of Feb. 10, and did not reflect Russia’s invasion of the Ukraine.

Separate data showed retail sales expanded for the fourth consecutive month from a year earlier in January, rising 1.6% due in part to a flattered comparison to last year’s low levels. That compared to a median market forecast for a 1.4% gain.

But retail sales dropped a seasonally adjusted 1.9% from the prior month, the second monthly downturn in a sign of the negative impact a surge of coronavirus infections was having on momentum.

“The falls in both retail sales and industrial production in January confirm that the Omicron surge has knocked back the recovery,” Tom Learmouth, Japan economist at Capital Economics, said in a note.

“We think consumer spending will fall across this quarter, but it should rebound sharply in Q2.”

Stop Buying These 11 Things That Are Free at Libraries