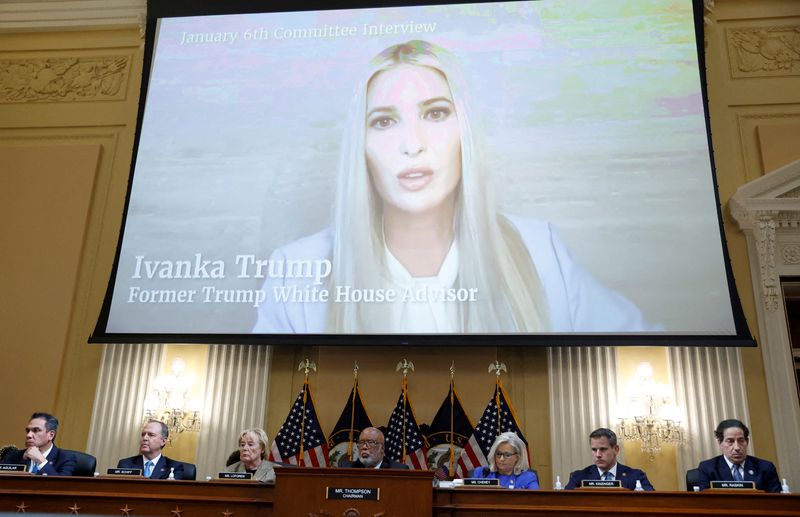 © Reuters. Former White House Senior Adviser Ivanka Trump is seen on a video screen during the public hearing of the U.S. House Select Committee to Investigate the January 6 Attack on the United States Capitol, on Capitol Hill in Washington, U.S., June 9, 2022. REUT

WASHINGTON (Reuters) – Donald Trump’s daughter and adviser Ivanka Trump told a congressional panel investigating the U.S. Capitol attack that even she does not believe the former president’s false claims that his 2020 election defeat resulted from widespread voting fraud.

Ivanka Trump, one of her father’s most trusted allies during his four years in the White House, appeared in a video deposition shown during the first in a series of congressional hearings by a House of Representatives select committee investigating the deadly Jan. 6, 2021, attack.

“I respect Attorney General (William) Barr. So I accepted what he was saying,” Ivanka Trump told congressional investigators.

And what Barr was saying, Ivanka testified, was that his Justice Department had discovered no significant fraud to support President Trump’s claim – one the former president is still making – that massive voter fraud in several key states caused the 2020 election to be “stolen” from him.

The committee showed a video of Barr’s appearance before panel investigators. In that video, Barr called his former boss’ fraud claims “bullshit”

The former president has been more successful in persuading Republican voters of this view. A Reuters/Ipsos poll completed on Wednesday found that 58% of Republicans viewed the outcome of the 2020 election to be the result of fraud.

Also shown testifying was Ivanka husband, Jared Kushner, another of the former president’s top aides. In the video, the president’s son-in-law mentioned “whining,” referring to top Trump aides threatening to resign because of the Jan. 6 attack.

The Jan. 6, 2021, riot followed shortly after Trump gave an incendiary speech to thousands of supporters outside the White House, repeating his false claims of a stolen 2020 election and urging them to march on the Capitol and “fight like hell.”